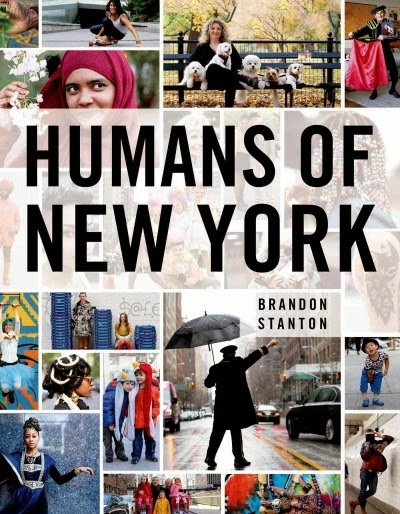 Humans of New York started as a simple photography project.  Brandon Stanton was working as a bond trader, but wanted to explore urban photography in Chicago.  After a period of time as the economy continued its perilous ups and downs, Stanton lost his job and turned to full time photography.  He planned a tour through several large cities, but came to a stop in 2010 in New York—a city with so much personality that he found things and people to photograph day and night.  With a burst of attention due to social media, Stanton attracted widespread interest.  Tumblr and Facebook played a major role in the popular spread of his work.

Stanton takes beautiful photographs capturing the cultural diversity present in New York City.  From kids playing on bikes to people in extremely creative garb, Stanton looks at the city and finds faces with a story to tell.  While some of the photographs in the book have been published on his social media sites, many can only be seen in this volume.  Most of the photographs have a “seen in _____” (neighborhood) tag, or perhaps a quote from the subject.  Here are just a few examples:

A  little girl in a school uniform with a red student of the week ribbon pinned to her chest.  Her quote:  “I listened to my teacher and went beyond and above.”

A man’s tattooed calves.  Stanton commented:  “He put his mother, two grandmothers, and great-aunt on his right leg.  He put his father on the other leg, probably so he could have a little peace.”

A man wearing bright yellow shoes, shorts, sunglasses and hat, sitting in a wheelchair.  “This is Banana George,” explained his caretaker.  “He’s the world’s oldest barefoot water skier.  He’s ninety-seven now.  When he was ninety-two, he set the world record for the oldest person to water-ski barefoot.”

A man walking three leashed dogs, engaged with a man walking with a toddler wearing a safety harness.  Stanton commented, “I saw them walking on two opposite ends of the plaza, and started praying that they’d end up in the same place.”

A picture truly is worth a thousand words, so I won’t try to explain too many of the incredible photographs in this book.  From everyday life to the weird, wild and wacky, Stanton has captured a vibrant view of the masses of humanity in New York City.  If this has piqued your interest, be sure to check out Humans of New York, either in book form or at:

http://www.humansofnewyork.com/
Posted by BPL Ref at 7:48 AM