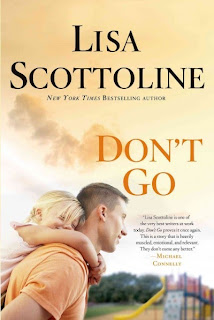 Bestselling author Lisa Scottoline is known for her strong female characters and gripping suspense stories.  In Don’t Go, Scottoline tackles a male protagonist, Dr. Mike Scanlon.  For the most part, I found the main character to be believable, although there were a few spots where I didn’t believe he would act in a particular manner.

On military duty in Afghanistan, Mike receives word that his wife Chloe has died in a household accident.  He is granted a very short leave to come home to arrange her funeral, and then must return to the frontlines, leaving his baby daughter with his wife’s sister and brother-in-law.  With an extreme shortage of doctors, Mike is asked to extend his service in Afghanistan.  Mike is pulled in both directions, feeling that he needs to be home for his daughter, but also feeling that military casualties will rise if he does not stay in Afghanistan to support his unit.  His remaining time overseas is fraught with danger, and he returns home with a whole new set of challenges.

His medical practice has been changed with the addition of new partners and he has trouble finding his place within the medical field as well as within his own family.  Because Mike has been away from his daughter Emily for an extended time, she does not recognize him and is scared of him.  Although Mike tries his best, he knows next to nothing about caring for a baby.  Additionally, many questions have popped up about Chloe’s death, although Mike seems to be the only one suspicious enough to investigate.  He goes blundering about like the proverbial bull in a china shop, risking his professional and family life.

In the end, Mike discovers many things about himself and about his co-workers and family.  The book takes a couple of twists and turns that I found hard to believe, and perhaps all the story lines are tied together a little too quickly and neatly at the end.  But overall, this was still a worthwhile story to read.

Lisa Scottoline is the author of twenty novels and also has a column entitled “Chick Wit” in The Philadelphia Inquirer, which she writes with her daughter, Francesca Serritella.  Their humorous stories have been turned into a series of non-fiction books entitled Best Friends, Occasional Enemies, Why My Third Husband Will Be a Dog, My Nest Isn’t Empty, It Just Has More Closet Space and Meet Me at Emotional Baggage Claim.  These stories, which only take a couple of minutes to read, are laugh-out-loud funny.
Posted by BPL Ref at 12:04 PM