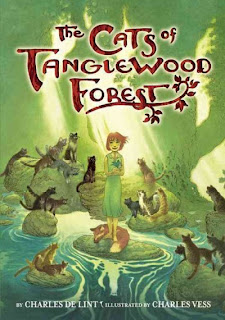 Orphan Lillian Kindred is being raised by her Aunt on a farm near the Tanglewood Forest.  Lillian dreams of finding fairies there someday but so far she’s never even glimpsed one, no matter how hard she looks.  On one of her expeditions, she falls asleep and is bitten by a venomous snake. The cats she’s befriended want to save her, but the only way they do that is to make her into something that isn’t dying: which is why when Lillian awakens, she’s no longer a girl but a kitten. Desperate to become a girl again, she’s sent to seek the help of Old Mother Possum who resets time—but Lillian has no idea what a dreadful price there will be to pay.

This is considered a juvenile novel, but I never let a label keep me from a good book:  some of the best books I know are allegedly written for children or Young Adults. Besides, I was familiar with an earlier version of this book under the title A Circle of Cats. They both begin the same way, but in this new edition expands Lillian’s story.  Both Vess and de Lint love folklore and it really shows through in this work. Most of the book is taken up with Lillian’s journey to find answers and a way out of her predicament.  The characters are both stock folktale and yet individual enough that it was hard to tell who could be trusted and who couldn’t.  My favorite characters include Old Mother Possum who is part human, part possum, and all witch; and T.H. Reynolds, a fox who may be helping Lillian or else leading her into trouble.

There are many allusions for those who look for them (Huck Finn, Mother Holly, Alice in Wonderland) but the story stands firmly on its own.

Vess’ artwork both complements and extends the story, which is exactly what a good artist should do.  His details on Old Mother Possum really bring the character to life, and his wonderful renditions of the wild terrain give the book a strong sense of place.  Between de Lint’s writing and Vess’ art, the book has a dark, untamed, dreamy feel to it. Then ending doesn’t tie up all the loose ends in a neat little package, either.  This is one of those books with a deceptively simple feel, but there’s power underneath.  When I finished the book, I found I kept thinking about certain scenes and wanting to know more. Besides, there’s the question of the unpaid debt. . . .

If I had any disappointments, it was that there really wasn’t a strong cat character despite the title of the book, except for the Father of Cats who appears briefly but memorably at the end. The cats are indeed the catalyst for the story (no pun intended—well, okay, maybe pun intended!) but the cats didn't figure as prominently as I would have thought. This is the most minor of quibbles in an otherwise enjoyable and memorable tale.  I hope there will be a sequel or even a series of sequels, letting Lillian explore more deeply into the mysteries of Tanglewood Forest.  It’s such an intriguing world that I hated to leave it.

I recommend Cats of Tanglewood Forest to anyone who loves fantasy, folklore, and coming of age stories.

Charles de Lint is best known for his urban fantasy novels.  Charles Vess is a modern fantasy master artist who has racked up a shelf-load of awards, including a couple of World Fantasy Awards for Best Artist.  Locals may know him best for the wonderful fountain in Abingdon or the special posters he’s done for local events such as Rhythm and Roots. Also, I highly recommend the book Drawing  Down the Moon:  The Art of Charles Vess to anyone wanting to see more of Vess’ work.
Posted by BPL Ref at 11:19 AM