Mercedes Lackey and the land of Valdemar 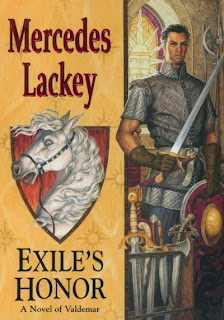 Note:  this is an overview to introduce readers to the series.  Holly will be reviewing the books in published order.

Long ago, a good man named Baron Valdemar lived in a land with a tyrant for a king. For a time, Baron Valdemar was content to use his magic  to merely protect his people from the tyrant, but the day finally came when he knew that the only way for the people to survival was to go to a new land which they called Valdemar.  He ruled over them wisely and well until he was old. The day came when he realized he needed to create a safeguard for his people to ensure that no matter what happened, the land of Valdemar would never have a tyrant king like the one they had escaped.

As Valdemar thought these thoughts about the future, three silvery-white horse-like creatures, called Companions, appeared from a grove. Mercedes Lackey says in her book Arrows of the Queen, that Companions, " … transcended horses in the way that panthers transcend alleycats, or angels transcend men." These Companions immediately bonded, one each to Valdemar, one to Valdemar’s son, and the third to the Valdemar’s closest adviser, the Chief Herald.  This set the pattern from then on: only those Chosen by a Companion could rule.

Because the Companions, who were not only sentient but also wiser than humans, were also good and kind, and would only Choose someone who had a pure heart. The Companions never Chose someone unworthy to bear the name of Herald. The Companions never made mistakes. To be Chosen by a Companion means to be bonded for life to a being who knows every thought you’d ever had, every action you’d ever done, every motive you’d ever acted on, and but still loves you anyway with that incredible acceptance. You can hear each other’s thoughts.  The bond is so strong that if one of you died, the other would likely die as well.

The Heralds responsibilities included serving and protecting the Monarchy, being the Monarch’s messengers, fighting the wars, sometimes judging the people, and even doing some healing when a regular Healer could not be found. One Herald is The Monarch’s Own, Chosen by a special companion, and this Herald is the confidant and advisor of the reigning Monarch, the one person with whom the Monarch could be completely honest, and more importantly, the one person who would be completely honest with the Monarch.

Those chosen as Heralds are taken to the Heraldic Collegium, a training school which teaches history, languages, mathematics, logic, and other traditional academic topics, in addition to weaponry training, training in fighting and battle, and training in your special Gift. Most or all Heralds have at least one special Gift, such as telekinetics, skill with a particular weapon, or fire-starting. One Gift is Mindspeech, a kind of extension of the mind-speaking a Chosen does with his Companion, only a Herald or Trainee with this Gift can mindspeak to anyone he chooses, the same way he does with his Companion.  Then the Herald in training spends one year on circuit with a full Herald, a kind of internship, after which, if all else went well, you would usually earn your Whites, the costume instantly recognizable from anywhere in the Kingdom as that of a Herald of Valdemar.

There are other collegia in Valdemar, such as the Bardic, for those with musical talent, and the Healers’, for those with that Gift. Some wealthy, aristocratic families sent their offspring there for schooling, but these students took the classes they chose and were not affiliated with any of the three Collegia, hence were called the Unaffiliates. They were not Chosen by Companions, and so could not necessarily be counted on to be pure in heart. This distinction occasionally presented problems. Indeed, often the Unaffiliates often resent and felt superior to those Herald trainees who were peasants, uneducated, poor, or different in some other way.

This is the life of a Herald Trainee in Valdemar. It has its wonderful points, not the least of which is the lifelong love and acceptance you can now forever count on from your Companion, but also includes the free training, good food (for some the first truly good food they’ve had in their lives), warm comfortable rooms (again, a first for some), and the companionship of others being trained for the same thing, who are of like mind. This life also has its rough points, including light (and not so light) hazing, straining to learn what your Gift is and how best to use it for the Kingdom. In many cases there are feelings of guilt because you were Chosen and this or that family member was left behind, and as often as not, being put into a position where you have to use your newfound Gifts and abilities before you are fully trained in their use in a situation with very real consequences- for yourself and for others.

This is the life of a Herald Trainee in Valdemar. Think you’re up to it? Join me as I begin a series of book reviews on over twenty of Mercedes Lackey’s books set in the Valdemarian world. My first review will be on the book Arrows of the Queen, which begins the tale of Talia, who is Chosen by the Companion Rolan.

Look for the review of Arrows of the Queen on the first Friday in May!
Posted by BPL Ref at 10:10 AM