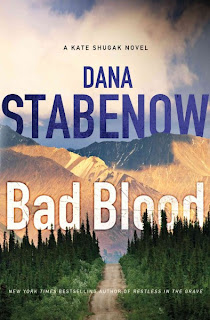 Dana Stabenow is always on my “must-read” list, and I eagerly awaited her newest release, Bad Blood. This is #20 in the Kate Shugak series. Kate is an Alaskan Native, an Aleut, who lives within a fictional national park in Alaska.  The books are rich with stories of Kate’s family connections reaching back to previous generations in earlier titles in the series. Currently, Kate is romantically involved with Alaskan Trooper Sergeant Jim Chopin (“Chopper Jim”) and is also the guardian of a teenage boy, Johnny. The author paints a vivid picture of the Alaskan landscape as well as unique characters that her fans have come to know and love.

Bad Blood starts with Sergeant Jim Chopin investigating the death of a young man found in the river between two feuding villages, Kushtaka and Kuskulana.  Due to geographical advantages, Kuskulana has always flourished while Kushtaka has grown smaller over the years.  The differences in the villages have spurred a feud lasting almost a century.  When the body of a young man from Kushtaka is found caught in a fish wheel, where do you think the natives go looking for a suspect?

Despite Chopper Jim’s investigation, one body is not enough for the feuding villagers.  Payback is demanded and the body count escalates.  Kate Shugak is involved as the community of the “Park” closes around their own.  Add a pair of Romeo and Juliet style star-crossed lovers, and the battle between the villages grows hotter.

This book seems a little shorter than the previous ones in the series.  Dana Stabenow has started publishing Kate Shugak short stories as e-books only, so perhaps this has carried over into her full length novels.  Very little interaction between old, familiar characters is included.  Even Mutt, Kate’s wolf/dog hybrid, gets only perfunctory mention, as people comment “Is that a wolf?” repeatedly.  While I enjoyed the book, the cliffhanger ending had me almost yelling, “You can’t end a book like that!”  On her website, Stabenow states that the next book in the series will be available in two years.  Don’t read the comments on her website (http://www.stabenow.com/ ) unless you want spoilers of what happens at the end of this book.

While you can read Bad Blood without reading any of the previous titles, this series is best read in order due to the major life changes that the characters have had over the years.
Posted by BPL Ref at 2:08 PM