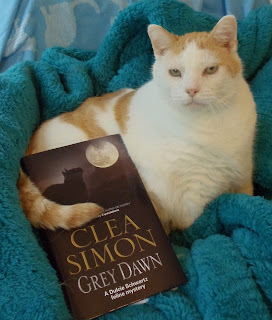 Grad student Dulcie Schwartz is back, still working on her thesis—or trying to amid many distractions.  For one thing, her department is searching for a new director and while Martin Thorpe, her advisor, is in the running, the university is bringing in some big name scholars for interviews as well.  It’s hard to know what to hope for:  on the one hand he isn’t particularly enamored of her topic, but if he leaves, she’ll have to start over with a new advisor.

A more enticing distraction are the pages of a manuscript that Dulcie believes might be a new, undiscovered work by the anonymous author of the somewhat obscure 18th century Gothic novel entitled The Ravages of Umbria.  Since Dulcie has pretty much staked her thesis on this author, this find could make or break her academic future.  She’s so involved in transcribing the text from the original handwritten version that she’s even dreaming sections of the story, especially those parts involving a coach trip with a mysterious stranger in a dark, wind-swift night with unearthly howls filling the air.

She’s so caught up in the tale that she’s only vaguely surprised when she thinks she hears a wolf in downtown Cambridge as she heads home that evening.  She knows that’s quite unlikely, but then she catches sight of her advisor looking disheveled, disoriented and—well, WILD. He rushes off into the night and Dulcie runs in the other direction.  The next morning she hears that an undergraduate was attacked, possibly by some sort of beast.

Was Dulcie an ear-witness to a crime?  Could her advisor be a werewolf?  Could Dulcie have read a few too many Gothic tales? Can Dulcie resist investigating this mystery?

The answer to the last question is an obvious and resounding “No!” Aided once again with cryptic advice from her late beloved feline Mr. Grey and her new kitten Esme, Dulcie rushes in where angels fear to tread.

Why do I like these books?  Because I can understand the rarified academic world Dulcie inhabits.   While most of us read books for entertainment or enlightenment, for Dulcie each turn of phrase in a book can have another meaning entirely and interpreting them can make or break her academic career.  She searches for scraps of writing as diligently as a forensic investigator looks at blood spatter. (I have vivid memories of nitpicking phrases from Shakespeare for my own college paper and trying to make them fit my objective.) She careens back and forth between the insular academic world and the more or less real world, albeit a real world where Dulcie can believe in communications from her cats (living and otherwise) yet scoff at her mother Lucy’s  premonitions as being products of an overactive imagination and too many hallucinogenic drugs during Lucy’s younger days.  In this book, which I see as a tour de force of the genre, Simon juxtaposes all those florid images from early Gothic novels with Dulcie’s everyday experiences.  Dulcie could be the very model of some of those Gothic heroines, yet would be appalled if you were to suggest this to her.  I find her disconnect to be funny, a sort of English major version of the physicists on “Big Bang Theory” but without a laugh track. Sure, other books have done something similar, but I appreciate Simon’s subtlety in the matter.  I’ve seen this sort of thing done in other books, but most feel they need to point out what they’re doing--wink, wink, nudge, nudge. I’ll admit that sometimes I’m not the most astute reader, but honestly I don’t need to be hit over the head more than once.  Okay, maybe twice.

I also enjoy the way Simon brings the setting to life.  I've never been to Cambridge, MA but she almost makes me feel as if I have visited "our fair city," as the Magliozzi brothers might say.

But what I liked best of all about Grey Dawn is the way that Dulcie solves the mystery through her deep understanding of academic studies. I particularly enjoyed the scene where Dulcie explains her reasoning to a somewhat bemused police detective (who had reached the same conclusion through less esoteric means.) It's that bit delicious insider humor that still makes sense to someone who hasn't done Literary Analysis in over 30 years.

As might be expected, I found all the scenes with cats were delightful and true to the feline spirit.  I have given up on a couple of mystery series with cats because the cats seem so generic. One cat is not the same as another, nor is a cat a dog.  (I can’t believe I have to actually say that, but apparently I do.)

If all you want is a cozy book with a single linear plot to solve, this may not be the book for you.  If, on the other hand, you like multiple stoylines, an academic sleuth who is less practical than she likes to imagine, and some slightly otherworldly felines, then Grey Dawn is a definite winner.  I suspect Garrison Keillor would recommend it to members of POEM (Professional Organization of English Majors) for their delight and amusement.

Full disclosure:  I received a preview copy of the book but that did not influence my review.