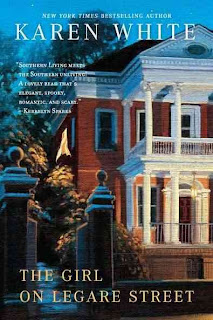 Karen White has been making a name for herself as a writer of Southern romance/mysteries with a ghost or two thrown in.  After having several different people request her books, I decided to give one a try.

The Girl on Legare Street opens with realtor Melanie Middleton trying to turn down a big sale. The purchaser is Melanie’s estranged mother, Ginnette, a renowned opera singer who left seven year old Melanie to be raised by her alcoholic father.  Melanie sees this as a ploy by her mother to try to insinuate herself back into her daughter’s life, and she’s not willing to play along.  To make things even more uncomfortable, the house she wants to buy is their old family home which has a lot of memories attached—among other things.

You see, Melanie is psychic.  She’s always had the ability to see ghosts, but has learned that many people don’t react well to that sort of thing. Her father certainly didn’t.  His life as a soldier didn’t include supernatural entities or events.  So Melanie learned to conceal her talent, even though some spirits refuse to be ignored—the ones in the house on Legare Street, for instance. At least one of the ghosts seems friendly enough, but another has a definite vicious streak.  It’s up to Melanie to try to uncover family secrets before another tragedy strikes.

There are several romantic subplots, along with a number of plot twists and some chills.  White does a good job with the Charleston, SC setting, giving readers a bit of history without weighing the story down. Similarly, she throws in bits about the restoration of historic houses, genealogy, and the real estate business without being tedious.  Characters are generally well developed, and there are some genuinely creepy scenes.

The only problem is that I didn’t realize this book is actually a sequel to The House on Tradd Street.  I wouldn’t say that you wouldn’t enjoy this book without having read the first, but I did realize fairly early on that I probably would have been more impressed with some events had I known some of the history of the characters. The book can be read as a standalone, but I think it would be more enjoyable if read in order.

White has now produced a third in the series, The Strangers on Montagu Street. Her other novels are not part of a series.
Posted by BPL Ref at 9:17 AM