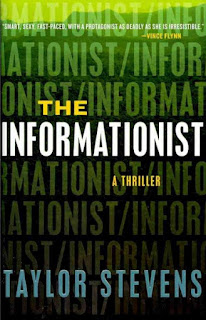 The experiences that shape an author’s life are often what shapes his or her novels and gives substance to the characters. Taylor Stevens is such an author. Stevens spent her childhood begging for food on the streets from Zurich to Tokyo as a member of the Children of God, an apocalyptic cult. She was only allowed to attend school sporadically until the age of twelve when she was separated from her family and spent the next ten years under the control of sadistic and often brutal cult members. During those years of pain and isolation, Stevens often told the younger children stories that she says took them from the terrible world in which they lived to a fantasy world they could imagine. When cult leaders caught her telling the stories, she was punished, the books she had so laboriously written were burned, and she was told her punishment would increase in severity if she told fiction stories again. In her early twenties she escaped the cult, settled into a life where she has educated herself.  She has returned to story-telling and has overcome huge obstacles to write what one critic called a “blazingly brilliant” first novel.
The Informationalist draws from Stevens’ experiences in Equatorial Guinea and other areas of Africa and her unorthodox youth to create a compelling character named Vanessa Michael Munroe. Stevens admits that Munroe is inspired by Jason Bourne and critics have likened her to Lisbeth Salander in the Steig Larsson books. Perhaps Munroe is derivative of these characters, but I find Munroe more complex, faster, and perhaps more deadly than either.
Born in Africa to American missionary parents, at fourteen Munroe becomes attached to a charismatic drug/ gun runner who mentors her in the ways of smuggling, strategy, and life in a deep culture of fear, corruption, and distrust.  In a night filled with torture and blood Munroe escapes from Africa and eventually turns up in America where she finds society does not accept her or believe her stories of the life she has led. Having endured horrific experiences and being immersed in brutality and violence while so young, Munro walks a very thin line controlling the violence in her own core to live a life she has carefully built away from the past.  There are very few people she loves, even fewer she trusts. She has her own clear code of honor that the innocent must be protected.  Like Jack Reacher she is a white knight wanting to do Good, but she knows if given the need or choice, she will do violence.
Munroe sells information. She is hired to go into developing countries where she gathers intelligence that she then provides—for a great deal of money—to whatever corporation, government, politician, or other interested party who employs her.  Using a very secure network of support, her ability to learn new languages in just a few weeks, and her facility for blending into cultures that few people can unlock, Munroe takes on assignments that intrigue and test her. The wealth she has accumulated gives her protection and freedom she compulsively needs.
Having just finished a year-long assignment in Asia, Munro has returned to her home base of Dallas to decompress and see her dearest friend Logan, one of the two people she does trust. The other person she trusts is Kate Breeden who functions as Munroe’s outside contact with employers. Texas oil billionaire Richard Burbank wants to hire Munroe to find out what happened to his adopted daughter.  While touring African countries with two friends four years ago, Emily disappeared. Repeated investigations have not turned up any information proving her dead or alive. Burbank wants closure, and he offers Munroe 2.5 million dollars to find out what happened to the girl. Reluctant to return to the Africa because of her past, Munroe is still drawn back to the only place she has ever felt was ‘home.”  Grudgingly taking security specialist Miles Bradford with her at Burbank’s insistence, Munroe lands in her old territory, is kidnapped, and left for dead.
The plot from there takes many twists and turns. Munroe is drawn back into the violence and her past slams into her with the force of a hurricane. Her survival seems unlikely and the aftermath of what happens leaves her betrayed and devastated.  I thought I knew how things were going to end, but Stevens upped the ante and caught me by surprise. 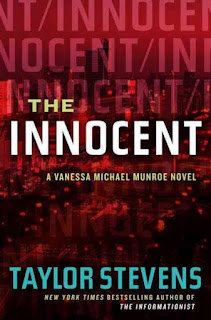 The Innocent
Eight years ago a man took five year old Hannah from her school and hid her in a cult called The Chosen.  Followers of the cult leader who is known as The Prophet have moved the child from country to country and hidden her deep in an underworld of abuse and manipulation law enforcement agencies cannot break. Former cult members who escaped as children have been searching for Hannah and now they need Munroe’s help to retrieve her. Set in South America this second novel has the same fast pacing and plotting as the first. Although she has made peace with some of her past, Monroe is again deadly, fascinating, and ready to save Hannah whatever the cost.  Critics often don’t praise second novels highly after a stellar first novel, but The Innocent has won high praise all around.
Again, Stevens draws on her own experiences to make you cringe at the world into which Hannah has been dropped. The magnitude of what Monroe faces to retrieve Hannah brings Monroe to a junction where she has to blend past and present to survive and to save the child. Like The Informationist this story moves quickly and with plot lines that keep you on edge and enthralled.
Posted by BPL Ref at 8:47 AM