Deer in the Headlights: My Life in Sarah Palin's Crosshairs by Levi Johnston 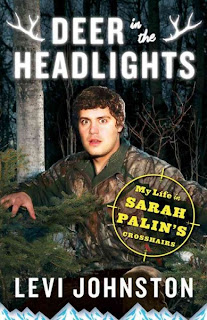 Okay, okay, it's not that I am a fan of Levi Johnston. You may or may not remember that Levi Johnston achieved his excruciating fifteen or twenty minutes of fame by enjoying the misfortune of impregnating Sarah Palin’s daughter, Bristol, just as Sarah was whipped out of the hat as John McCain’s vice-presidential running mate in 2008.
Levi had sort of dropped from my consciousness until I espied his tome. I have to admit the reason I wanted to read this book was just to see what Levi's take on Sarah Palin is.  The subtitle gives a big hint.

The early pages of Levi’s book tell the story of his family and his early life in Alaska… lots of manly hunting and fishing and womanly cooking of the kill. I skipped these pages. I just wanted to know about SARAH.

Trashy of me, I know, but I have to admit that it became quite absorbing and more than a little surreal. One day you’re out shooting big game in Alaska, the next day you ARE the big game being shot by the paparazzi and people you don’t even know are your new best friends.   By the time I got to page one eighty-eight, and Levi's pretend date with comedian Kathy Griffin for the teen choice awards I could hardly put the book down.

Levi’s story is basically that of a small town boy who thought he knew where his life was going to take him until he got caught up in the Sarah Palin swirl. Once he was caught up in the swirl he got pushed around a bit, he rocked the boat a bit, and then he was dumped. He went from home town hockey hero to Playgirl centerfold and arm candy. Quite a ride for an eighteen year old high school drop-out, but hey, stranger things have happened.  Not to me, thank goodness, but it’s easy to see how someone can be caught up in all the glam, the glitz, and the excitement.

The book likely presents more than you ever wanted to know about Levi and Bristol, but it also offers an interesting peek behind the scenes of the political process. For instance, Levi didn’t think he was engaged to Bristol until the political advisers told him he was.

If you are a true fan of Sarah Palin and you wish to continue to be one, you might not want to test your loyalty by reading this book. On the other hand, if you aren’t a Sarah Palin fan, you’ll love it.