Connie Willis: The Future Visits the Past 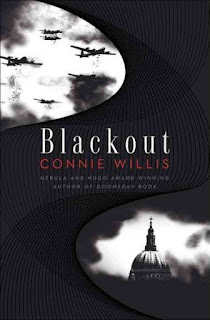 Connie Willis is known for her marvelous time travel fantasy books.  The premise is this:  In the year 2060, serious students of history can research topics first hand by traveling back in time to observe events first hand.  Only those willing to undertake intense preparations are accepted: they must know the languages, accents, customs, current history, and be able to blend in with the populace.  While it’s believed that no historian can change history, the idea is to be as unobtrusive as possible.  The time travelers are dropped off in their time period and must return to a specific place to be retrieved; the system will not work if there are contemps (contemporary people) about or any recording device that would show a person appearing and disappearing.  Certain other rules apply:  for example, one person can NOT be in the same time twice, even if the locations are far apart; and if a person from the future dies while in the past, he or she is truly dead.  There is no resurrection in the future.
Even though they’re published separately, Blackout and All Clear form one story. A young group of Oxford students are embarking on their time travel research.  Several are headed back to the World War II era to study various aspects of life then.  Polly is going to observe shop girls during the Blitz.  She will have a cover story, papers (including a ration booklet), money, and a memorized list of where bombs will fall during her stay so she can avoid renting a room or working at a place that will be hit during the time she’ll be in there.  Michael is visiting several different time periods to take notes on “ordinary heroes,” the people who rise to the occasion and do amazing things, like the firefighters who went to the Twin Towers on 9/11 or the people who sailed to Dunkirk to evacuate the troops.  Merope—who has to change her name to something more time-period suitable—is playing the role of an Irish maid at one of the English country houses where children were taken in order to get them out of London during the Blitz.  She’s just popped back for a quick lesson on automobiles, as she’s been informed that she’s going to have to learn to drive; and it’s a chance to get away from the children for a bit, especially the Horrible Hodbins, a brother and sister duo who would try the patience of a saint. Each of the three students is intent on his or her assignment, made more difficult by the fact that the Lab has suddenly started changing assignments or canceling them outright.
As our three main characters step back into the past, each quickly becomes aware that something is not quite right.  Michael’s landing is off by a couple of days, meaning he has missed his connection; Eileen is having trouble getting to her drop to return to her time period.  A few quirks are expected, but soon it becomes apparent that something has gone very, very wrong. Will they be trapped in the past?  And even worse--is it possible that the theories are wrong and that something they’ve done has changed history?  Will England fall to the Axis powers?  Will there even be a future to return to?
Michael and Eileen set out separately for London, knowing that Polly is supposed to be there somewhere, but they’re not even sure what name she’s using.  Polly is also having trouble with her drop and she has a deadline:  she’s been back to that era before, and if she doesn’t leave before her earlier self visits, she will die. 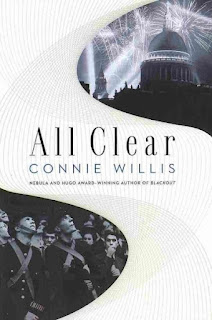 I am a Connie Willis fan.  Not only does she do meticulous research that makes the reader feel what it was like to really live in that time, but she creates appealing characters.  They aren’t perfect by any means, but they are honest, decent human beings who want to learn.  However, I admit I was rather daunted by these two volumes, totaling over a thousand pages.  A thousand pages! I wasn’t sure I wanted to read that many, at least not for one story.  At another point I stopped to bemoan the fact that there were only two hundred pages left!  I was ready and willing to read for a thousand more.  (And yes—somehow I still want to know more of what happened after the book ended.  I do hope Ms. Willis will clue us in on what happens in the future.) There’s a balance of danger, tension, humor and romance.  I’ll admit that on a couple of occasions I was confused by a shift in perspective and time, but for the most part it all held together beautifully; and by the end, all I could do was marvel at how well it had been plotted.
Most of all, I love the perspective this technique of future visitors in the past affords. These time traveling students open themselves up to an era; like most young things, they rather think they already know all the answers, but they’re as eager as puppies to explore.  It’s sort of a pet peeve of mine that modern historical novels—or movies or television shows-- have to insert modern sensibilities into their characters whether or not most people from that era would really hold such a belief.  I remember being in an Anthropology class back in--well, never mind when, let ‘s  just say a few years back—and the professor starting talking about “Bonanza.” Did we really think we were seeing a representation of the way 19th century people thought and acted?  Would they really have been respectful of Native Americans?  Did they all really think women should vote or run a business? Highly unlikely, especially given that some people we still respect today held some views that would largely horrify us because concepts and beliefs we take for granted now would be either unknown or highly controversial then.  This is what Willis gets so very right: the students go back in time, believing that they understand exactly what people thought and how they behaved in a particular era, only have their preconceptions challenged—and even to have some of their own prejudices challenged. Characters will surprise you in ways both good and bad, just like real people do. Willis also creates characters I’ll remember for a long time, from the absolutely exasperating Alf and Binnie Hodbin to the great actor Sir Godfrey to the wretched landlady, not to mention Polly, Merope and Michael.
The students’ knowledge of coming events can be incredibly poignant, as when a young shop girl believes that the bombing won’t last more than a week or two, when Polly knows that it continues for months. Yet Polly herself isn’t prepared to come face to face with the extent of the destruction, nor the uncertainty of what happens to people she’s come to know and care about. It’s a very different thing to read about a bombing and quite another to be living it.  I’ve read other novels (and non-fiction works) about World War II but Willis really made me feel what it was like to be in one of the bomb shelters or huddled in the Underground during an attack in a way none of those other books were able to do.  If you’re an Anglophile, you’re in for a double treat, as Willis obviously knows and loves London, especially St. Paul’s Cathedral.
Most of all, I loved the gradual way that our students matured in the face of adversity.  The people at the end of the book were a far cry from those fresh-faced, self-assured young folk who set out at the start.  One way or another, they have been forever changed, and so have those around them.
If you want to give this story a try, by all means check out both volumes at once so you don’t have to wait to find out what happens!
Posted by BPL Ref at 9:56 AM