The Only Plane in the Sky: An Oral History of 9/11 by Garrett M. Graff 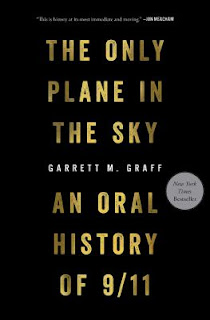 Everyone of a certain age remembers where they were on September 11, 2001. I was 15 years old, and stuck in gym class followed by lunch. After initial rumblings of “something” happening, it was several class periods before I got any real information. (It was before smartphones after all.) While I remember those two classes vividly, the rest of the day is a total blank.

In the subsequent years, I’ve watched retrospectives and read survivor accounts but I wanted to better understand the lead up to that day, as well as the devastating aftermath that reverberated throughout the world. For that, however, I will have to read something else. Fortunately, the author warns in the prologue that this was not that kind of book so I adjusted my expectations. The Only Plane in the Sky focuses on the stories of ordinary people on probably the most extraordinary day of their lives. We do hear from some big names such as Dick Cheney, Rudy Giuliani, and even Robert DeNiro, but mostly it’s every day folks who share their experiences.

It probably goes without saying that this is an extremely difficult read. I think most people, listening to these stories, try to put themselves in others’ shoes. But it’s almost unfathomable. We hear from widows and widowers, schoolchildren whose nearby schools were evacuated, mothers, fathers, sisters, brothers. One man called his parents to tell them he was okay, and then went back into the World Trade Center to try to help others. He never came out again. The stories lay heavy.

However, it is a worthwhile read. I appreciate the way the narrative was organized. It’s roughly chronological, jumping back and forth between the Twin Towers, the Pentagon, and Shanksville, Pennsylvania. It also has a small section from the perspective of those who were children or young adults on 9/11 – from a couple of months old all the way up to college students. It briefly touches on a few Muslim children (and adults) who almost immediately began experiencing prejudice after the attacks. I appreciate that it was addressed but it does feel slightly glossed over.

The Only Plane in the Sky is a valuable resource for learning the stories of regular citizens on an unprecedented, historical day. Most of us can pinpoint the moment we learned of the attacks. With books like these, we can start to step outside of our viewpoint.