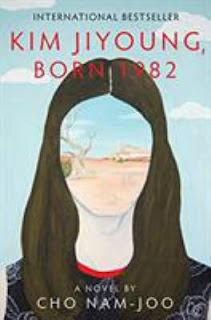 Jiyoung is a married Korean woman who quit her job to become a stay at home mom to her young daughter. She soon starts to impersonate other women – both living and dead, known and unknown to her. In these moments, she truly believes she is someone else. Alarmed by this, her husband sends her to a psychiatrist.

This novella details the ordinary childhood of Jiyoung, as well as her ordinary school years, ordinary marriage, and ordinary sexism she faces. Author Cho Nam-Joo has said that she wanted Jiyoung to be an “everywoman” and for Korean women to feel less alone when they read her story. It’s important to note that when this book was released in Korea in 2016, it became a cultural sensation.  I was only vaguely aware of its reputation so I did some Googling for more context. From what I gather, it was seen as a turning point for Korean feminism, and it was very divisive. Male politicians were praised for promoting it while a female K-pop star became the target of cyberbullying when she mentioned she was reading it. Cho Nam-Joo simply wanted to highlight the banality of everyday sexism and how it can slowly chip away at a woman’s psyche. In one article, a reader remarked on how the situations in the book didn’t alarm her at first because they are so commonplace. But then she thought that maybe they shouldn’t be.

As a story, however, I will admit that I felt very detached from the characters. I think any woman (American, Korean, or otherwise) will find Jiyoung’s experiences relatable. But because the prose is almost clinical and a little dry and because we never get Jiyoung’s point of view, it’s hard to feel the level of connection I would like to. There were times were it also felt clunky but that could be a case of “lost in translation”.

While I can’t say this is my new favorite book, I do think it’s an interesting read just from a cultural and historical perspective. (Cho Nam-Joo even sprinkles citations throughout to back up factual statements.) It can also help open readers’ eyes to the insidious nature of misogyny.