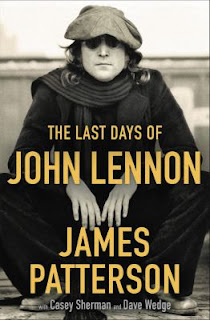 As a Beatles fan, I’ve read quite a few Beatles biographies over the few years (okay, decades) since I became infatuated with John, Paul, George, and Ringo. Hunter Davies wrote The Beatles: The Authorized Biography back in 1968, and although I didn’t read it till much later I still enjoyed it. In recent years, the best one I’ve read is Tune In: The Beatles: All These Years Vol. 1 by Mark Lewisohn (reviewed here.)

James Patterson just had to get his name on a Beatles biography also, tackling the time before Mark David Chapman shot and killed John Lennon on December 8, 1980.

The title is a bit misleading. Sure, Patterson and his co-writers/co-researchers Casey Sherman and Dave Wedge delve deeply into the mind of Chapman the murderer. The authors switch between chapters detailing what Chapman was doing in the days leading up to the murder, and then moving back in time all the way to the early days of the Beatles. If you have never read anything about the Beatles, this work might be a great overview (with an emphasis on John’s history.) However, having quite a few Beatles books on my personal shelves, I didn’t learn more than one or two new facts.

If you are a true crime aficionado, you might also be a little disappointed because the authors don’t go too deeply into the blood and gore of the murder. The seeming calm that Chapman displayed is rather creepy though; he claimed that during his time in jail leading up to his trial he never slept better in his entire life.

As many other people have questioned, I can’t help but wonder how much writing Patterson himself does on his co-authored books. I found an article that says he often creates extremely detailed outlines, up to 80 pages or more, for his collaborators who then flesh out the book. Does this launch their careers? Or simply sell more books with the Patterson name? Patterson has donated millions of books to schools and millions of dollars to schools and independent bookstores, so I have to applaud him for his commitment to literacy.

I recommend this book only to readers with a casual interest in the life and death of John Lennon, or to die-hard James Patterson fans. We know the latter exists, or we wouldn’t have so many shelves dedicated to his books.