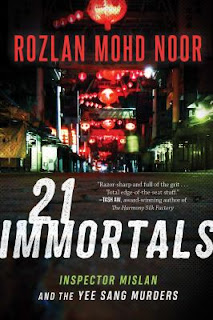 Inspector Mislan Latif is with the Major Crimes Unit in Kuala Lumpur.  Headed home after a long day, he gets a call to come to a bizarre scene in the home of a wealthy businessman:  the man, his wife, and young son are all seated at a table where a traditional Chinese New Year dish is being served, their expressions and gestures frozen in time.  Not only are they dead—they have been embalmed.

Mislan is convinced they were killed somewhere else and the tableau staged. He’ll need to find out where before he can work out why they were murdered and the identity of the killer.  The problem is that this high profile case has attracted the attention of some powerful people, and Mislan is going to have to work quickly if he’s to have a chance to solve the case.

The author is a former crime investigator with the Royal Malaysian Police, so the book has an authentic feel.  This is the first in the series to be published in the U.S., with two more scheduled for next year.  The jacket copy says he is at work on the fifth book from his home in Thailand.  It originally came out in 2010 in Malaysia, but since I don’t see a translator, I assume it was written in English.

I enjoy reading books set in (to me) exotic locales, especially when I feel the author knows his or her stuff; when it’s a book by someone who visited a place for a week and then seems to be an authority, I have doubts that distract me from the book at hand.  I had no doubts here.  The mystery is certainly an intriguing one and the characters held my attention.  Mislan is a single father with a young son whom he adores.  He’s attracted to the forensic pathologist on the case and they have been seeing each other casually.  I liked the way the author blended Mislan’s work and personal life.  He’s dedicated, honest, and tenacious.

Overall, I did like the book. It’s more of a police procedural than the classic or cozy mystery that I usually pick up, so I confess I sometimes got lost in the acronyms and terms.  PC is Press Conference, for example, and “morning prayers” is the morning debriefing for officers. I was a little dense about some inter-departmental relationships, but these are minor quibbles.  I liked reading about some of the everyday events, from the food to the habit of smoking despite the no smoking signs everywhere. The overall impression is that of a modern, multi-cultural, nuanced society. I have the impression that if I knew just a bit more about the social structure that I would have appreciated the book all the more.

I harbor suspicions about the solution of the mystery, wondering if there will be ramifications in future books.  It was an interesting look at a unique place, one that seems to blend several cultures.  If you’re looking for a solid police mystery that’s a bit out of the ordinary, this book might be a good choice.