My Life in a Cat House by Gwen Cooper 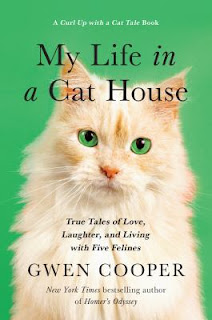 Back in 2009, Gwen Cooper published book about her blind cat, Homer, who lived his life with zest despite his disability.  Homer’s Odyssey became a best-seller and Cooper became an advocate for cats with special needs, which is how she came to adopt Clayton, a three legged cat, and his sister, Fanny.  With a strong social media presence, Cooper’s many fans learned bits and pieces about the rest of her feline family.
Interest remained strong, so she began writing down stories that centered just on one or the other of her felines to give them each a chance in the spotlight.  Vashti and Scarlett were already in the household when Homer arrived, but their appearances in Homer’s Odyssey were fairly brief.  Here we learn about their own quirks—Vashti was the “Picasso of pee,” for example. Cooper’s writing is entertaining, personal, and quite often hilarious, as when she is bedridden for a few days and her cats decide to try to entice her to move, preferably in the direction of their food bowls.

Cat lovers will nod in recognition at many of the feline antics, or do more than nod:  Cooper is often sent tales of her readers’ companion animals.  I think any animal lover will quickly identify with the way Cooper sees her cats:  not just as animals, but as sentient beings with strong personalities.

Not to sound too picky, but I just like the way Cooper writes.  Her sentences are extremely well composed, not short and choppy in the way some animal stories are told; it's  as if the writer is afraid that readers can’t understand anything more complex.  Her vocabulary is also excellent.  It’s not that she’s showing off, but that she avoids repeating the same words so nicely that you don’t even realize she’s doing it.

I’ll confess I did slide over some parts in the book because as with most animal lovers I hate to read about the death of one that I’ve come to know and love. Again, Cooper deals with the subject compassionately, refusing to make the reader wallow in her grief, but ending on an up note inasmuch as possible.

Let me quickly add that there are still living cats at the end, so don’t expect a three hanky experience unless you count laughing until you cry.

Meygan reviewed Homer’s Odyssey in 2014 and you can read her review here; I reviewed it in 2009 and my review is here.

I also reviewed Cooper’s novel Love Saves the Day, a charming story which I think is underrated.