Monster, She Wrote: The Women Who Pioneered Horror and Speculative Fiction by Lisa Kroger and Melanie R. Anderson 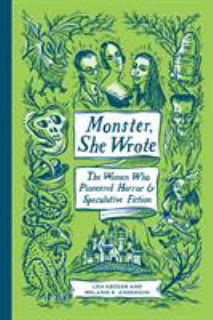 Note:  We apologize for not having Nevermore Notes this Wednesday. We will try to do better next week.  Instead, we have this review from Christy.  Thank you, Christy!

Most people would recognize the name Mary Shelley and her groundbreaking work Frankenstein, considered by many to be the first science fiction book. But does the name Margaret Cavendish ring a bell? It sure didn’t to me but I learned that in 1666 she wrote The Blazing World about an Empress traveling to another world that has talking animals and inventions like an air-powered engine. Predating Shelley by over 150 years. Though scholars debate if The Blazing World is even science fiction, it certainly seems trailblazing at least. (Cavendish herself was quite a character, even by 2020 standards.) Cavendish opens up this nonfiction book that focuses on the contributions of women in the literary world of horror, speculative, and just plain weird.
I really enjoyed reading Monster, She Wrote. The writing is easily accessible, and the layout is well done. Each author receives a mini biography followed by a reading list and recommendations of similar authors. (My to-be-read wish list grew bigger and bigger!) Because of its episodic design, it was easy to drop in and out of reading it, especially if I only had a few minutes of free time.  The book is divided roughly chronologically covering classic authors like Shirley Jackson and Mary Shelley as well as newer writers Jewelle Gomez and Helen Oyeyemi. The last section, instead of focusing on any one author, covers new takes on old tropes like vampires and haunted houses.
I particularly enjoyed the section on the paperback horror boom of the 70s and 80s. The entry on Joanne Fischmann discusses her contributions to the teen horror genre of that era under the pseudonym Jo Gibson. I was surprised to discover, however, that I know her better as Joanne Fluke – author of a successful cozy mystery series with titles like Chocolate Chip Cookie Murder and Christmas Cake Murder.
Overall, this was a very enjoyable and easy read. I think it would be a valuable resource to anyone wanting to expand their reading horizons. On a superficial note, the book itself is absolutely gorgeous too!
Posted by BPL Ref at 8:42 AM