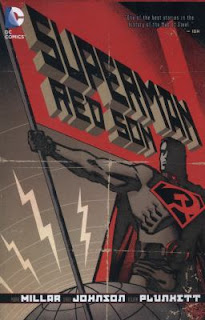 What would happen if Superman never crash-landed on a small farm in Kansas?  What if he never met the Kent family or Lois Lane, but met Stalin instead?  When Superman’s space ship lands on a Soviet collective farm in Ukraine, he’s raised on a steady diet of socialist ideals and Soviet propaganda, growing up to “[fight] a never-ending battle for Stalin, socialism, and the international expansion of the Warsaw Pact.”  His superpowers, however, make a very different impression on the world as he tries to do the right thing—and Lex Luthor becomes a very different kind of villain.

Superman:  Red Son by Mark Millar is a unique twist on the Superman mythos.  Although it includes many of the familiar qualities I recognize from other Superman stories—such as the indomitable Lois Lane, the obsessively vengeful Batman, the villainous Lex Luthor, the heroic Wonder Woman, the Superman who just wants to save the world—it takes all these things and shakes them up, creating a complex and engrossing graphic novel.  Moreover, it has an exceptional plot that takes twists and turns within the DC Universe that I never expected (here’s looking at you, Russian anarchistic Batman), as well as excellent characters and incredible art.

I was particularly enchanted with the artwork:  Dave Johnson, Kilian Plunkett, and a host of other talented artists create a finely detailed, darkly beautiful comic that’s a pure pleasure to read.  The illustrators pull imagery straight from the 1950s Cold War, creating a world that’s sometimes cold and bleak but changes with the appearance of Superman.  The panels are often laden with reds and browns and grays, which can occasionally give the world a dismal appearance, but splashes of colors, like pink or green, have that much more of an impact.

I also liked having Superman as the narrator.  On the one hand, it humanizes his character, gives him a depth that’s hard to see when it’s just Superman zooming across the page and, in general, being his heroic self; on the other hand, it also allows readers to follow his progression from a young superhero under Stalin’s thumb to a leader in his own right.

Personally, I found it interesting to see how different he is from the Superman I know and yet how he remains the same in some ways.  He wants to protect human life, even if it’s to his detriment; however, it’s also interesting to see how obsessive he becomes—that is, how he becomes so bent on preserving the planet and keeping humankind safe that he’s willing to sacrifice free will and human thought to accomplish his goals.

Overall, Superman:  Red Son is a fascinating graphic novel that provides an alternate history for Superman and the DC Universe as a whole.  While I did find the conclusion to be slightly dissatisfying, I was intrigued by the ways in which Superman—and Lex Luthor—changed as they followed very different ideological paths and, more to the point, discovered their own reasons and ways of protecting humanity.
Posted by BPL Ref at 8:12 AM