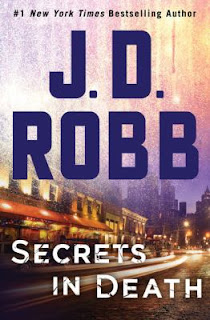 Gritty New York streets, sharp eyed homicide cop, someone done wrong—all things that readers can expect from J. D. Robb in her series featuring Lieutenant Eve Dallas of the NYPSD.  Set in about 2060 New York City, Secrets in Death begins with Dallas meeting a friend at chic Manhattan hotspot Du Vin.  Before the night is done, “social information reporter” Larinda Mars is dead at Dallas’ feet.  With Mars’ inquiring mind and habit of digging up secrets that others might wish kept private, there is no shortage of suspects.

Mars knew a lot about a lot of people.  It was her business, after all, reporting upon the glitzy social set.  Of course some prominent people come from humble and sometimes shameful beginnings.  Mars knew just what buttons to push and how long she could push them.  But as she turns up dead, Dallas must question if Mars might have pushed someone a bit too far.

Fans of J. D. Robb will appreciate the consistent elements in this series entry.  Dallas is at her best, always speaking for the dead, even those who weren’t the most pleasant in life.  Her husband Roarke owns half the city, or maybe half the planet, and quite a few things off planet as well.  The two or three obligatory sex scenes make their way into the story, as Dallas always needs a bit of relaxing after working a solid 24 hours after the crime.  All is to be expected, as Robb is the well known pseudonym of Nora Roberts.

It’s been several years since I read anything by Robb, but I found that it was easy to pick up again even if I wasn’t reading the series in order.  I was amused by Dallas’ partner Detective Delia Peabody, especially in the scenes where Dallas is doing something nice for Peabody, making Peabody want to hug her, but knowing that any physical affection would likely make Dallas come back with a punch.  Peabody’s joyful exuberance (whether it be about real coffee or her main squeeze Ian McNab) is a great foil to Dallas’ serious cop face.

Listening to this as an audiobook, Peabody had a different voice than I thought she would, sort of a fresh-off-the-farm girl who might spout “Golly gee willikers!” any moment.  Roarke’s Irish brogue was laid on quite thickly, and distracted me until my brain got used to the speech rhythms.

And then there is the cat.  Galahad is a minor character by any measure, but the fat, lazy, gray cat makes Dallas and Roarke’s mansion feel like a home.  He is often there to wind around Dallas’ feet at the end of a long day, or to perch on her backside as she gets a few hours of sleep before waking up to work again.  Galahad makes just enough of an appearance in each book to make me believe that Robb/Roberts knows the love of a cat and can accurately describe feline mannerisms.