The Weight of Feathers by Anna-Marie McLemore 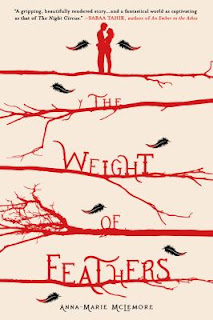 The Palomas and the Corbeaus are enemies, locked in a violent feud that has lasted for more than a generation.  Although both families make their living as traveling performers (the Palomas as part of a mermaid exhibition, and the Corbeaus, who are former tightrope walkers, as fairies walking amongst the trees), they avoid one another and clash when they can’t.

Lace Paloma knows the Corbeaus are trouble.  They have magia negra, black magic, that means death to anyone it touches.  But when a disaster strikes the small town where both families are performing, it’s Cluck, a Corbeau boy, who saves Lace’s life.  She thinks his touch means the end of her life, the end of her world, and, in a way, it does; however, meeting Cluck opens her eyes to a world she never knew existed—and a truth that has blackened their families for years.

Oh, this book.  I think I lost my heart to this book.

To start off, The Weight of Feathers by Anna-Marie McLemore runs almost parallel to William Shakespeare’s Romeo and Juliet.  It has feuding families (Corbeaus versus Palomas), star-crossed lovers (Cluck and Lace), and tragic undertones (escalating tensions between the families, violence, lies, sordid secrets, etc.).  However, The Weight of Feathers isn’t just another Romeo and Juliet remake; rather, it’s a modern love story that incorporates elements of Shakespeare’s tragic play and subtle hints of magic.

Personally, I loved reading Anna-Marie McLemore’s novel.  It was fascinating and lyrical; it was the kind of book that made my heart swoon, but kept my interest piqued with its humor and heart and magic.  The Weight of Feathers is woven with threads of magic and fantasy, but it remains firmly grounded in reality, dealing head-on with personal tragedy and tough truths that will break your heart.

It’s emotionally intense, especially as Cluck and Lace slowly grow closer and realize the truth of why the Palomas and the Corbeaus are mortal enemies.  (It’s like a soap opera.  No joke, it has that level of intensity—and I couldn’t help gasping when I learned the truth of the Paloma-Corbeau feud.)

But, most of all, I loved the writing.  I read a review that noted that McLemore’s YA novel is “beautifully rendered,” and I found that rings true throughout the book.  I absolutely loved the way The Weight of Feathers was written.  While it did take some time for me to sink into the story, to understand the cadence and the style, I gradually grew to love the way the author described the setting and verbalized feelings and told stories about the Palomas and the Corbeaus.

I loved the way the words simply flowed.  The book is beautiful, like a song, even when describing terrible tragedies; it describes things in a different way, utilizing the English language and turning it in different ways; it creates candid, complex characters.  Honestly, I just loved everything about it, like these lines:
·         “The rain burned into her.  She curled up tighter, cheek against her sleeve.  She shut her eyes tight enough to see comet trails of light.  She tried to keep out the feeling that the rain was a million lit matches.  And the strange smell in the air that was a little like apple cider if apple cider was the venom of some night creature, the rain and stars its teeth.”

·         “Her mouth left a smudge of lipstick on his.  She rubbed it away.  He closed his eyes and held her hand there, kissed her thumb and took it lightly between his teeth, holding onto it.  It trembled the veins that held her heart, that feeling of his teeth on her thumb pad and fingernail.”

·         “He wore his loneliness like a scar.  Most of the time his sleeves covered it, but when she cuffed them back, he couldn’t hide it.  She wanted to tell him she was not afraid of what he was, this red-streaked thing in all the pure, perfect black.  But the words dissolved between their lips like ice crystals.”

·         “Lace couldn’t hear what they were whispering.  But now they were all witnesses to this thing she and Cluck had made them see.  They would have to carry the truth, whether or not they spoke it.  It would cling to them like the burrs off sticker grass.  If they twisted it, it would pinch them back.”

Like I said, I lost a piece of my heart to this book and these words.
Posted by BPL Ref at 8:52 AM