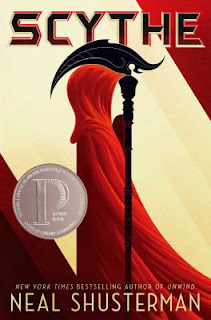 
Citra and Rowan live in an extraordinary world.  No hunger, no disease, no war, no poverty—for most, it is a perfect world where incredible technology has evolved a collective consciousness and humanity does not age, does not die, unless a Scythe chooses you for gleaning.  Citra and Rowan, however, discover their world is far from perfect.

Chosen as apprentices for Scythe Faraday, Citra and Rowan must endure a grueling regimen of training to become scythes, free agents who select individuals for gleaning—for permanent death.  They must learn how to end a life through any means necessary, no matter how grisly.  As they step into the world of the scythes, they uncover a bewildering world of policies and politics and danger…especially when Scythe Goddard sets his eyes on them.

Scythe by Neal Shusterman is incredibly compelling.  I’ll be honest, it’s one of those books that I could hardly put down for more than a few minutes.  I mean, on the one hand, it’s like watching a train wreck:  something very bad is happening, but it’s difficult to look away.  On the other hand, it’s a breathtaking story with endearing characters, a fascinating setting, and an intriguing plot.

As the story goes on, it’s easy to become attached to Citra and Rowan.  I was right in the middle of their story from the moment Scythe Faraday selected them as apprentices, so I quickly became invested in their lives and caught up in their world.  Speaking of which, I was particularly fascinated by how this futuristic world worked , because everything down to the smallest detail is micromanaged by the Thunderhead, a “cloud” system in which the collective knowledge of all humanity is stored.

Shusterman creates a unique story with Scythe, because he doesn’t immediately offer readers a dystopian world even if that’s what we eventually get.  It wouldn’t be a stretch to say dystopian is a popular genre in YA literature (think:  Hunger Games, Maze Runner, Cinder, City of Ember—and I’m sure there’s even more); however, Shusterman doesn’t start out with a terrible world.  In fact, the world seems pretty perfect.

There’s no war, no disease, no hunger, no inequality, no aging, no natural death.  Humanity has reached the zenith of its evolution:  it is perfect.  Yet beneath this veneer of perfection, you have the scythes who help keep the human population in check—and you have a world that, for all its perfection is stagnating.

What does humanity have left to achieve if everything has been done already?

Scythe is one of those YA novels that cause readers to ask some very hard questions about life and death, humanity’s relationship and/or dependence on technology, and what would really happen in a Utopian society.  It’s an exciting, spine-tingling thrill ride, but it’s also an intriguing examination of human psychology because it constantly made me wonder, “What is really the purpose of life when life never ends?”

I quickly fell in love with Scythe, but I’ll be the first to admit that it’s a pretty intense novel.  Although death is everywhere in this book, it seems like such a distant concept as people can no longer truly die.  There are revival centers where, if someone unexpectedly dies, they’re brought back to life and reconstructed.  Diseases are nonexistent, aging is a thing of the past, and horrific accidents are merely an inconvenience.  There’s blood and gore and horrific things that happen, yet they’re only temporary—and it’s really difficult to digest this cavalier attitude about death.

Besides which, I think I was spooked by the way people lived.  I don’t mean the general prosperity or lack of disease or the utopia the Thunderhead has appeared to create; rather, I was a bit perturbed by the general disrespect for life.  In one of the journal entries between chapters, which are shared by the various Scythes readers meet, I stumbled across one that really made me think:

“If you’ve ever studied mortal age cartoons, you’ll remember this one.  A coyote was always plotting the demise of a smirking long-necked bird.  The coyote never succeeded; instead, his plans always backfired.  He would blow up, or get shot, or splat from a ridiculous height.

“And it was funny.  […]  Because no matter how deadly his failure, he was always back in the next scene…

“I’ve seen human foibles that have resulted in temporary maiming or momentary loss of life.  […]  And when it happens, people laugh, because no matter how gruesome the event, that person, just like the coyote, will be back in a day or two, as good as new, and no worse—or wiser—for the wear.

“Immortality has turned us all into cartoons.”

Human life has been downplayed, made into something laughable.  More importantly, it’s not seen as a finite, precious thing; rather, it’s an indefinite commodity that can be wasted.  Immortality has created a type of stagnation in human culture.  There’s nothing new to discover, nothing new for which to strive, nothing new to create—so what’s really left?

Scythe brings up some very interesting questions about life and human emotion and immortality, specifically what it could mean and what it could bring.  It’s entertaining, yes; however, it also makes you think and it makes you wonder.  It feels distinctly dystopian, even though humanity is arguably faced with a utopian society; it makes you wonder, like Citra and Rowan, what’s the real price tag for a perfect world.
Posted by BPL Ref at 9:33 AM