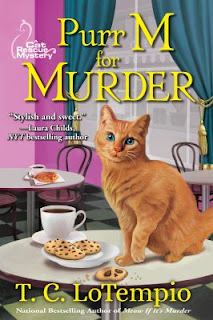 Sydney McCall’s sojourn in the Big City came to a crashing end when she caught her fiancé cheating—with her best friend, no less.  (There’s a lot of that going around in cozies these days.) So naturally she heads home to Deer Park, NC to lick her wounds and start afresh.  Sydney’s sister, Kat, is director of the local animal shelter and she needs Sydney’s advertising expertise to help with fundraising and pet adoption.  Their first idea seems very promising:  partner with a local café to offer snacks and introductions to adoptable cats and kittens. Trouble begins when the café’s landlord threatens to shut down the event and to raise the rent on the shelter.  Intemperate words are spoken, so naturally when the landlord turns up dead, Kat and Sydney are suspects.

What else to do but follow the lead of her childhood hero Nancy Drew and play detective?

This is a first in series book, so there is a fair bit of introducing the town and the characters which does tend to slow the book down a bit.  The cats are cute and of course Sydney ends up with a new furry friend at the end.  The basic plot was good; the motive was clever and believable.  However, for me the pacing was off:  a clue introduced very early on and mentioned occasionally during the course of the book isn’t really followed up on until 200 pages later, after which the mystery is quickly solved. The animal shelter angle is fresh enough, but so far the characters aren’t especially memorable.

As mentioned above, Sydney’s motives for returning are pretty much standard for today’s cozies, as is her spunky can-do attitude and her attraction to the local cop. The rest of the characters are rather standard issue as well but I’m hopeful that will change as the series progresses and more time is devoted to developing rather than introducing characters. As it is, it’s not a bad way to spend a couple of hours, especially if you’re interested in animal rescue.
Posted by BPL Ref at 9:23 AM