The Woman in Blue by Elly Griffiths 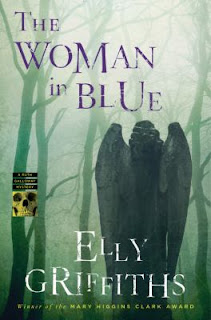 When Ruth’s Druid friend Cathbad sees what appears to be a woman wearing a blue cloak standing beside a tombstone in the moonlight, he wonders if he is seeing a real woman or an apparition.  After all, the town of Little Walsingham is known for visions of religious figures, especially the Virgin Mary.  But when a woman’s body is found in a nearby ditch, it seems that he may have been among the last to see the victim alive.
Meanwhile, a former colleague has contacted Ruth about some troubling letters she has received. Hilary is now an Anglican priest and is on her way to a conference in Little Walsingham.  If there’s anything Ruth has learned, it’s not to ignore coincidences, so it’s with some trepidation that she arranges a meeting.

Of course, DCI Harry Nelson is the officer in charge, and he is not pleased at having Ruth and Cathbad involved in yet another investigation.

This is the eighth in the popular Ruth Galloway Mystery series. Griffiths has created a marvelous cast of characters with complex relationships; to try to explain them all would make it sound like a soap opera, but it’s not.  For the uninitiated, Ruth is a forensic archaeologist at the local university who has worked with the police on several cases, so most of the cases have a strong historical component.  Many also delve into the realm of folklore, which is something I particularly enjoy.  There is sometimes a whiff of otherworldly elements or superstition, but there is no real magical intervention in the stories.

I do enjoy the plots, but the main draw for me is the aforementioned cast of characters.  Ruth, for example, is a teacher but more a working archaeologist.  She’s no good at the politics of academia, bad at small talk at parties, and frequently feels out of place.  She’s untidy, a bit overweight, definitely unfashionable, and yet she’s comfortable with herself.  Oh, she may think she should lose a few pounds, but she doesn’t obsess over it or feel compelled to try to change in order to fit in. I find that very refreshing.

Because of the character development, however, this is a series best read in order. The first book is The Crossing Places.­
Posted by BPL Ref at 9:37 AM