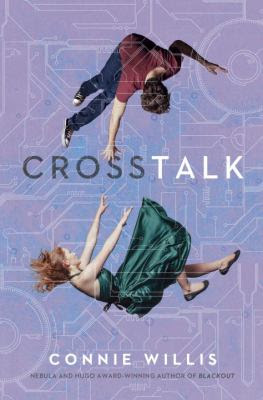 Briddey Flannigan pretty much has it all.  Not only does she have  a good job at communications giant Commspan, but she has landed possibly THE most eligible bachelor at the company.  Trent is not only a fast rising executive who drives a fabulous car, he’s gorgeous to boot.  And he’s serious about the relationship!  He wants them to have an EED, a procedure in which a neurosurgeon gives them both implants to enhance their mutual empathy.  It’s all the rage; all the best people are getting them.  What could possibly go wrong?

The only problem is trying to keep it a secret until after their engagement.  Gossip spreads at the speed of thought not only at Commspan but through Briddey’s nosey family as well.  The best she can hope for is to try to misdirect them, at least after the operation and she and Trent connect.  That could be filed under “Easier Said Than Done.”

Every time I start a Connie Willis novel, I get a bit impatient.  There is usually a good bit of set-up for the first part of the book: family entanglements, romantic attachments, disagreements, all done with such a light touch that it seems like fluff.  Then the plot really gets rolling and most of the “fluff” turns out to be groundwork for important developments later. At the end of the book, I’m stunned, amazed, and delighted.  As soon as my senses recover from the roller coaster ride, I find myself thinking, “How’d she do that?”

That’s why I tell people Willis’ writing is deceptive. It only seems light and superficial when in fact she makes a lot of interesting social commentary along with a good tale well told. For example, she shows us a hyper-connected world, where Briddey is flooded with communications from all sides, leaving her overwhelmed —and yet the thought of NOT being connected is, well, unthinkable.  People are constantly buffeted by texts, emails, phone calls, Skype, FaceTime, and messages; they long for peace and privacy but can’t bear the idea of being left out of the loop.  Briddey sometimes feels she’s drowning in communication but there’s no filter, nothing to separate truth from fiction, vital from trivial.

And information is everywhere, correct or not.  Rumors fly about office romances, industrial spies, lay-offs, what the competitors are planning, the Next Big Thing, who’s about to be promoted, and who’s about to be fired. In her family, Aunt Oona, having been schooled in the fine art of texting by Briddey’s precocious niece Maeve, bombards her with reminders about Daughters of Ireland meetings, her sister Mary Clare frets about anything Maeve does, pre-teen Maeve struggles to have some independence from her mother’s strictures, and sister Kathleen encourages her to try all the new dating sites, from Tinder to JustDinner to Latte’n’Luv (for people who think a meal might be too much of a commitment.)

That’s another strength for me.  I like the way she creates memorable characters, people I’d love to meet, from Aunt Oona and her love for the Ould Sod to messy but cute C.B. Schwartz holed up in the basement office.  I’d like to take Maeve out for ice cream just to hear her relate the plot of the new zombie movie she’s not allowed to watch (but has) and have her teach me how to program my phone.

I also feel the need to memorize the shapes and colors of the Lucky Charms marshmallows. You’ll know what I mean if you read the book.

Willis’ writing can be sweet, but it’s never saccharine, and it always comes with a side of satire.  She has a sharp sense of humor and a good eye for how people manage to bog down in the trivial, missing the big picture.   There’s also a sense of hope. This isn’t to say things always work out as I think they should or that no tragedies occur; it’s just that there’s a core belief that there is some good in people; maybe not all people, but just enough.   Most of all, I know I can count on Willis for likeable characters, an entertaining story, some thought-provoking concepts and commentary, and passages I will long to read aloud to someone else.  Also, I’ve found that after reading a Willis book, time and time again I will come across something that will remind me of some passage or incident.  I firmly believe that someone will create C.B. Schwartz’s SOS app to let people escape from the tyranny of their communication devices or at least dodge a few messages, and I wouldn’t be surprised if someone came up with an EED implant.   And when I hear about those, I’ll know that, once again, Connie got it right.

If you're already a Willis fan, I'll say that this is  in the vein of To Say Nothing of the Dog:  light, funny, and gently satiric. The setting is slightly futuristic instead of Victorian, but the feel of the book is similar.