So first up on my Read Harder Challenge, I tackled: 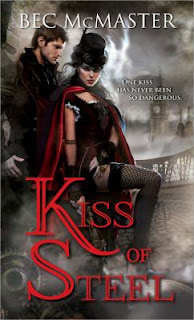 I started with a debut novel, Kiss of Steel by Bec McMaster.  Although I originally intended to read A Man Called Ove, a debut novel by Fredrik Backman, I stumbled across Kiss of Steel purely by accident and discovered it was just what I needed to complete this challenge.  First book in the London Steampunk series, Kiss of Steel tells the story of an alternative Victorian age in which verwulfen (werewolves), vampires, automatons, humans, and more live side-by-side in a steam-fueled world.

Honoria Todd fled to the rookeries in a desperate attempt to escape the Echelon, the blue-blood (i.e. vampire) aristocracy of London who rule over the city with an iron fist.  But when Blade, de facto master of the rookeries, discovers her living at the fringes of his little kingdom, he becomes embroiled in a series of unexpected mysteries.  Soon, a vampire--a blue-blood who has crossed the Fade, who has completely succumbed to blood lust--is terrorizing the rookeries and it's up to Honoria and Blade to stop it--and the Echelon--before it's too late.

I actually enjoyed reading Kiss of Steel.  It wasn't quite what I expected, but I wouldn't say that's a bad thing.  Granted, it was a bit explicit, hyper-violent, and incredibly grisly; however, McMaster's debut novel was a mixture of action, romance, science-fiction and paranormal fantasy that I found thrilling.  Overall, while I did like Kiss of Steel, I do think it could have been better.  I would have loved to have delved deeper into the alternative history and discovered more about the people--and creatures--that inhabited this world. 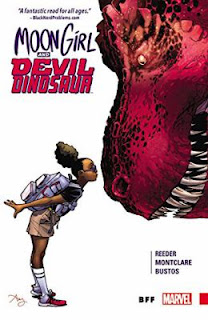 It starts out with Lunella, who is 9-years-old and quite unlike other girls her age.  She's an unexpectedly talented inventor and she's also an Inhuman--and the Terrigen Mist that's creeping through the city, the amorphous haze that will activate her Inhuman DNA, terrifies her.  Desperate to keep her Inhuman DNA dormant, Lunella sets out to discover alien technology that will help her stop the Terrigen Mist and keep herself human.  That is, if Devil Dinosaur, who was transported to the future with the same alien technology, doesn't destroy everything first.

I loved reading Moon Girl and Devil Dinosaur.  I admit, I was a little hesitant to read it at first.  I'd seen single issues in the local comic book store and, for some reason, I couldn't imagine myself reading them--and then I discovered the collected volume at the library.  I immediately fell in love.  Moon Girl and Devil Dinosaur is a lot of fun to read.  Although it takes place in the Marvel Universe, readers don't really need a whole lot of background about the Kree and the Inhumans and the Terrigen Mist to enjoy the story.  It has a dynamic, intelligent character, and it's a crazy, fun adventure that will lead you across time and the city of New York. 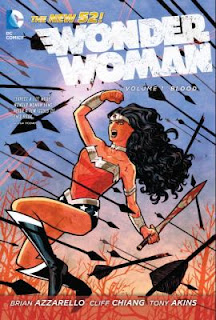 Last, I checked out Wonder Woman:  Blood (Volume 1) by Brian Azzarello, Cliff Chiang, and Tony Akins.  I have long been a fan of comic books.  I love Batman and Superman and even Aquaman, and I've found a recent favorite in Squirrel Girl, Daredevil, and Hawkeye; however, I've not read much of Wonder Woman.  She's an interesting character to be sure, but I've just never found myself compelled to read about her until now.

In Wonder Woman: Blood, first in the New 52 series, Wonder Woman finds herself caught in the middle of a battle for supremacy between the Greek gods of myth.  Diana has long abstained from the more complicated dealings between these capricious gods, but Zeus has gone missing--and Hera is on the war path to destroy the child he left behind.  Now, the remaining gods, including Apollo, Hades, and Poseidon, are in a war for the king of gods' throne, while Hera cuts a bloody swath across Paradise Island to rectify the injustices done to her.

Let me say, I like Greek mythology.  I've always been intrigued by it and I've gone out of my way to discover more about it than what I learned in school, but I wasn't really impressed with their appearance in Wonder Woman.  Honestly, I wasn't really all that impressed with the story in genera.  I was a little disappointed, especially since I went into this comic with such high expectations.  I'm a fan of powerful, self-sufficient women, and I love the idea of Wonder Woman, who is a warrior first and foremost; however, I'm not so sure I like her in practice.

It's difficult to describe, but let me put it this way:  I like Batman, because he is human and he is deeply flawed.  I like Superman, because he is an alien who grew up in Kansas and he is good to the best of his ability.  Likewise, I like Aquaman, because he is half-human/half-Atlantean and he struggles daily with his dueling identities.  And all these characters have one thing in common:  they were raised, in my opinion, in a recognizable place and way.  Diana, on the other hand, was raised on Paradise Island with a different set of beliefs and a completely different set of rules, which makes it difficult to relate to her on a personal level.  More to the point, it made Wonder Woman:  Blood (Volume 1) less than enjoyable to read.
Posted by BPL Ref at 9:50 AM