This year, I decided to make a New Year’s Resolution:  I’m going to read more books and I’m going to read a wider range of books.  Thanks to the Read Harder Challenge of 2016 by Book Riot, I can do just that.  Book Riot, which caters to readers and writers and lovers of books, has published this challenge for a few years now, providing readers with 24 categories to help them broaden their horizons and dip their toes in a different genre.

The list has much more with some challenges proving more difficult than others, but it’s an entertaining way to jumpstart the reading year and read beyond the boundaries of one’s comfort zone.  I have a habit of slipping into paranormal and/or fantasy novels with a pinch of historical fiction and romance thrown in for a little variety; however, with the Read Harder Challenge, I’m branching out with books that I never would have found if I hadn’t decided to pick a book I wouldn’t normally read.

With the Read Harder Challenge, I’ve finished a number of new books and stumbled across some others that, while they won’t go on my challenge list, I’ve enjoyed for the pure pleasure of reading.  I’ve also managed to: 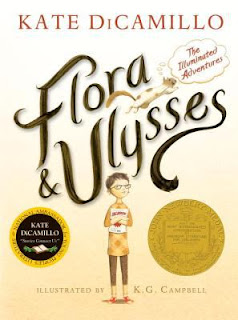 For my middle grade novel, I completed Flora and Ulysses:  The Illuminated Adventures by Kate DiCamillo.  A fun little book with amusing illustrations, Flora and Ulysses was a pleasant discovery.  I admit, I picked it up for the simple fact that it had a squirrel on the cover—I mean, who would be enticed by a book that has a squirrel as a main character?—and finished it with an appreciation for DiCamillo’s work.

DiCamillo, who is also the author of Because of Winn Dixie and The Tale of Despereaux, weaves heart and wit into yet another children’s classic.  Flora and Ulysses caters to a younger audience, yes, but it’s accessible and enjoyable to read even as an adult.  It toys with more mature themes, like divorce and loss; however, it does so in a way that’s understood by children and appealing to parents.  It’s a good book with a good story—an odd story, but a good one, nonetheless.  Overall, I’m glad I read something out of the ordinary for me. 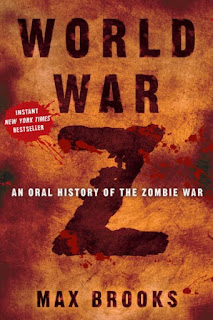 As for my audiobook requirement, I actually revisited World War Z by Max Brooks.  I originally listened to the audiobook simply because I loved World War Z, as can be attested by my previous review of Brooks’ novel, and I was intrigued to see what it would be like to listen to an audiobook with a full cast (especially since I discovered it featured Nathan Fillion, Martin Scorsese, and, of course, Mark Hamill).  It was a happy accident that I happened to stumble across an Audie Award winner from 2007.

I highly recommend actually listening to World War Z for fans of the novel.  Having a full cast makes World War Z a singularly entertaining way to spend a number of unhurried afternoons, folding laundry or walking a pet.  It’s still full of the same stories, the same diversity and detail that made it such a wonderful novel for me, but, now, I had the chance to actually listen to those stories and more fully imagine the characters behind them.

(In the interest of full disclosure, I will note that I think I picked up an abridged version of the novel.  I’m not positive if the abridged novel is the only one available, or if I simply couldn’t get my hands on a complete copy with ever chapter intact, but, regardless, I recommend finding a full copy of World War Z for the greatest effect.  My only complaint was that it left out a handful of my favorite chapters.) 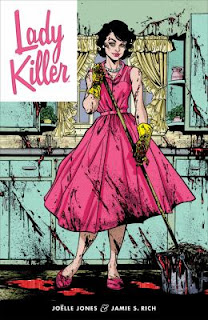 Last, I picked up my non-superhero comic:  Lady Killer by Jamie S. Rich and Joelle Jones.  I picked up Lady Killer at my local comic bookstore on a whim, because I liked the cover (oddly enough) and I really liked the idea of reading about a housewife who worked part-time as a hired killer.  It was a fascinating dynamic that intrigued and, eventually, compelled me to pick up a copy for myself.

Josie Schuller is far from being a superhero.  She’s pragmatic, ruthless, and absolutely cold-blooded.  She’s a survivor, which means anything goes when it comes to protecting herself and her own (including her darling twin girls).  While I enjoyed the plot and the pace and the characters involved in Lady Killer, I also loved how Rich and Jones pulled from iconic fifties advertising, making the novel as historically accurate as possible and rendering the story with beautiful illustrations.  It’s terribly gory, I admit, but such careful attention to detail and quality made me fall in love with Lady Killer.  It’s probably one of the best comics that I’ve read within the last year—and it might simply be one of the best I’ve ever read.  Period.

For more on the Read Harder Challenge of 2016, check out www.bookriot.com.

Note:  We will be updating Ambrea's progress on the challenge throughout the year.  If you decide to participate, please let us know in the comments section!
Posted by BPL Ref at 8:52 AM