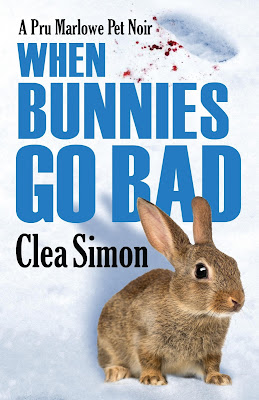 Bunnies abound in this new entry in the Pru Marlowe Pet Noir series.  There’s the wild bunny being kept illegally by an elderly woman who calls on Pru because she’s heard of Pru’s skill as an animal behaviorist; there’s the bunny in the painting stolen in a recent art heist; and then there’s that fixture of the resort slopes, the ski bunny.

The latter is Cheryl, the arm-candy girlfriend of an obnoxious businessman type named Teddy Rhinecrest.  Pru encounters the couple while out with her sometime boyfriend and full time police detective Jim Creighton.  What should have been a nice dinner is spoiled when Rhinecrest picks a fight with his girlfriend Cheryl, the aforementioned ski bunny.  Creighton steps in to calm things down, but it won’t come as any surprise to readers when Teddy turns up dead.

For once, Pru doesn’t have a personal stake in the investigation.  She really doesn’t want to be involved, but then Cheryl calls Pru for help with her King Charles Spaniel.  Pru goes to help the dog and finds things are more complicated than she expected. . . not to mention the appearance of an old acquaintance who brings both old world charm and menace.

I’ve enjoyed this series from the start. For the uninitiated, Pru is more than a behaviorist.  She’s an animal psychic, able to pick up bits of information from a variety of animals.  The communication is disjointed, bits and pieces of things that Pru struggles to understand.  It can also be very distracting because she can’t turn it off.

One of the things I like the most about the series is the way that the characters continue to evolve.  At the beginning, Pru was all but shattered by this sudden gift of inter-species communication.  She was so convinced that she was mad that she checked herself into a mental health clinic.  She lives in fear that someone else will find out about her ability.  Add this to her history of unhappy and unfortunate personal relationships and Pru is one defensive and prickly lady, given to consuming large amounts of alcohol to deaden the pain and fear.  Her one confidant is Wallis, her opinionated tabby cat who functions as advisor and commentator, whether Pru wants to hear it or not. (No pun intended.)
However, over the course of the series Pru has begun to open up just a little.  She is learning to question some of her own assumptions and to figure out that maybe, just maybe, she doesn’t have to face everything alone.  She’s also getting better at trying to decipher the messages she gets from the various creatures.

That’s not to say that this is a series that has to be read in order.  Each is a standalone, though some characters carry over for several books.

The murder actually takes a bit of a back seat to some of the other mysteries in the book; while there is a resolution, it happens off camera so to speak.  Thinking it over, I still found it a satisfying read as I was more interested in some of the other things that were going on.  I admit I often read more for character than for plot, and this one was particularly well done in that respect. This isn’t to say that the mysteries got short shrift, just that as a long time reader I was more attuned to the character development.

This series just keeps getting better and better.

Full Disclosure:  I was sent an ARC (Advance Reader’s Copy) of the book.  I was under no obligation to review the book and receiving the ARC did  not affect my review.
Posted by BPL Ref at 10:21 AM