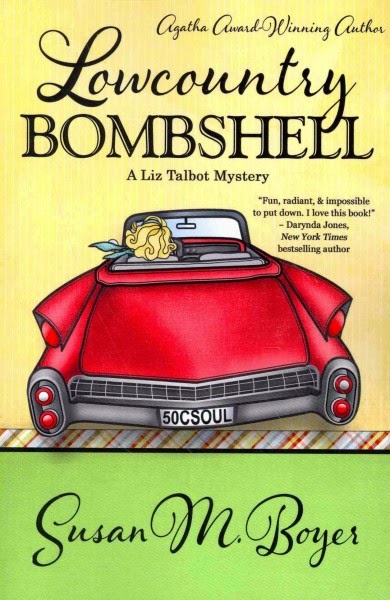 In her first adventure, Lowcountry Boil, private investigator Liz Talbot had returned to her childhood home of Stella Maris after the death of her grandmother.  The second book picks up with Liz accepting a case from a newcomer to town, a woman who is the doppelganger of Marilyn Monroe and the "Bombshell" of the title.  That’s not where the resemblance ends, either.  Calista was born fifty years to the day after Marilyn was born; she was baptized with the same birth name, Norma Jean Baker.  She married at sixteen just as Marilyn had, and to a man with the same name.  This isn’t coincidence:  Calista’s mother and adopted aunt are convinced she’s Marilyn’s reincarnation and helped arrange some of these events.  Finally Calista had enough and fled to make a life for herself—one that started with changing her name from Norma Jean to Calista.

Now the anniversary of Marilyn’s death is fast approaching, and Calista believes someone is out to see that she goes to an early grave too—especially after a friend of Calista’s is murdered and sleeping pills appear on Calilsta’s nightstand.

Is someone really out to do Calista in?  Or is this some sort of ploy?

I hadn’t read Lowcountry Boil, but that didn’t deter me from the second book. Author Susan M. Boyer has done a good job with creating a lively series with a good sense of place and entertaining characters. Liz is a feisty fashionista and germaphobic  Southern Belle who knows her fashion designers as well as her firearms.  Coming back to Stella Maris has been good for her, as she tries to recover after the break-up of a bad marriage. Trouble is, she’s attracted to her former brother in law, Nate, and the feeling is mutual.  In fact, Nate has turned up to help with her investigations, much to the dismay of Michael, Liz’s high school crush.  Michael has gone through a break-up of his own, and he’s ready to settle down with Liz and raise a family. Michael also takes a dim view of Liz’s dangerous profession.

Others are much more supportive.  In addition to Nate, Liz has help from her brother who works in law enforcement, and a godmother with a touch of second sight.

Then there’s Colleen, a former classmate of Liz’s who became former not by graduation but by suicide.  Now she’s become a sort of guardian spirit for Stella Maris, watching over the town and paying Liz an occasional visit.

I hesitated about mentioning the supernatural elements for fear it would make people think this was a just escapade in which Our Heroine only solves the case via unearthly means.  On the contrary, most of the detecting is good old fashioned research with some slightly shady surveillance (okay, more than slightly shady, but they do it so well!) thrown in. The psychic hints are vague enough that they’re easy to ignore.  Ghostly Colleen is in the background for most of the book, but comes through twice for Liz although neither intervention was obvious to me at first.  However, I have to say that I find her to be one of the most intriguing characters.  On one level, she’s still the old high school friend but on another she’s a spirit with a mission—someone who is seeing a bigger picture than the humans around her.

Add to the mixture Liz’s parents, especially her father who knows just what buttons to push to get his little girl to come by and see him, the mandatory friendly diner and waitress, and a few other colorful characters make this a fun book that doesn’t stoop to slapstick.  There are a few steamy romantic moments, some nice lines I want to try to remember to use (“She has too many pots on the stove” instead of “too many irons in the fire”), and an interesting plot. I was also impressed by the references to various Marilyn Monroe biographies that Liz refers to as she tries to unravel the mystery.  In fact, she made the biographies sound enticing, so I may want to read those, too.  Kudos also to Boyer for a love triangle which is a good deal less contrived than some.

In short, Lowcountry Bombshell is an enjoyable mystery with an interesting premise and solid characters.

Full Disclosure: I was sent a copy of the book in hopes I would review it.  This did not influence my review.

Win a copy of Lowcountry Bombshell!  If you would like to win, please leave a comment at the end of the review. The deadline is October 30, with a winner selected on Halloween! US entries only, please; I’m sorry to say the library budget doesn’t extend to international shipping.