Drinking and Tweeting by Brandi Glanville 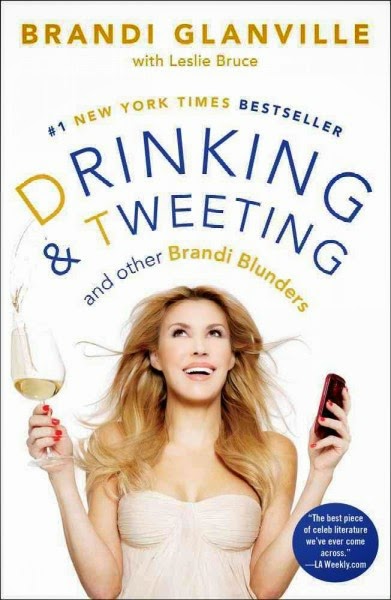 We all know that the media loves celebrity gossip.  (Remember the Jennifer Anniston and Brad Pitt divorce? Tabloids STILL talk about their divorce nine years later!) I have been guilty of reading these magazines while waiting on my groceries to be bagged, and, as pathetic as it sounds, there are celebrities that I want to know more about.

When a copy of Brandi Glanville’s book Drinking and Tweeting: and other Brandi Blunders made its way to me, I was somewhat inclined to read the book because her name was very familiar. I didn’t know anything about Brandi other than she was on The Real Housewives and although I had never watched the show, I had friends who ranted and raved about Brandi and her unfiltered mouth. So, I googled her and found that her ex-husband, Eddie Cibrian, left her for Leann Rimes. I’m still not sure why, but I wanted to read Brandi’s story. Also, it had been a while since I read what I call a “junk food” book (a book that you read for enjoyment only and retain nothing beneficial from it).

Brandi and Eddie’s marriage was never perfect. He had several affairs and he wasn’t the best hands-on father to their children. Nonetheless, Brandi was wealthy and by being married to Eddie, she was able to live in sunny California, close to Los Angeles. Brandi had ignored Eddie’s first affair because she was comfortable with forgiving him due to her circumstances. (Where would she go if she ever left him? She had given up a modeling career to stay home with their two children.)

However, thanks to Celebrity Gossip sites and magazines, Brandi caught wind that Eddie was having another affair and this time it was with country singer, Leann Rimes. With Eddie two-timing her yet again, Brandi decided that enough was enough. She was filing for divorce.

Brandi’s Drinking and Tweeting is a somewhat humorous book that gives readers insight just how ugly a celebrity divorce can be. There were times when I felt sorry for Brandi because she was a complete wreck after the divorce. I couldn’t feel too sorry for her though because the woman “downgraded” to a Land Rover because of finances, and she also dropped thousands of dollars for a plastic surgery. (I’ll give you a hint—the surgery wasn’t for her nose.) But in spite of her vulgar name-calling language, a reader doesn’t have to be a genius to see that she loved and possibly still loves her ex-husband. Journalists don’t realize that when they capture this celebrity sleaze, they aren’t just destroying a person’s reputation—they may be destroying their life. However, if not for the tabloids and paparazzi then Brandi wouldn’t have known about Eddie’s second affair, so kudos to her for dumping him for good!