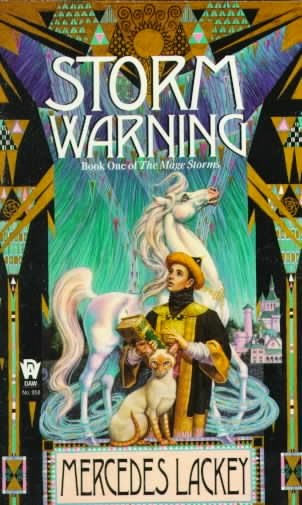 Reviewed by Holly White
Storm Warning, the first of the Mage Storms Trilogy, immediately follows Winds of Fury (the third & final book of the Mage Winds Trilogy) in the Valdemar chronology.  Although a link to the introduction to Valdemar is included in each of my reviews, I am going to include an excerpt here because this story brings it to bear quite powerfully:
“Long ago, a good man named Baron Valdemar lived in a land with a tyrant for a king.  For a time, Baron Valdemar was content to use his magic (for he had some powers) to merely protect his people from the tyrant, but the day finally came when nothing would protect them unless it was a revolution.  Baron Valdemar knew, however, that he and his people could not hold out long in an actual revolution, so he took his followers and settled in a new land far away, which he named after himself.”
Storm Warning opened up on the heels of Valdemar’s defeat of Hardorn. Hardorn lay in waste in the wake of their King Ancar’s reckless use of magics.  During the war, Valdemarian assassins had killed Ancar and his mage ally Hulda, the spirit of Mornelithe Falconsbane, and Ancar’s envoy from a land to the east of Hardorn, simply known as the Empire.  That envoy’s death caused the Valdemarians great concern.  The Empire’s envoy had been in the process of creating a mage gate to go back to his homeland, when he had been struck with a knife whose hilt bore the Heraldic seal of Valdemar.  As he died, he fell through the mage gate, taking the knife back with his dead body, into the throne room of his master, King Charliss.  Now Valdemar had come to the attention of the ruthless ruler of the Empire.
After the war was over, Valdemarian historians pored over old documents to learn what they could about the Empire, only to discover to their horror that the Empire was none other than the land from which Baron Valdemar had originally come.  As soon as the Empire recognized the insignia on the knife, and came to the same conclusion, they would be out for blood.  War was inevitable; it was only a matter of time.
Karse, a country which was Valdemar’s old enemy, had joined forces with the Valdemarians during the war against their mutual enemy Ancar.  Now that the war had ended, Karse sent an envoy named Ulrich, and his secretary, Karal, to Valdemar to try to turn that temporary alliance into a permanent treaty.  Ulrich and Karal had to overcome years of prejudice to learn to accept the Valdemarians.  This attempt at mutual understanding was further complicated by the fact that there was a spy for the Empire in the palace.  The spy attempted, in an effort to eliminate any help Valdemar might have, to assassinate all the envoys from all of Valdemar’s allies, including those from Karse.
An’desha, a good mage formerly possessed by the evil Mornelithe Falconsbane, struggled painfully with not only that evil man’s memories and inclinations, but also the memories and inclinations of all the men whose bodies Falconsbane formerly possessed.  Karal and Ulrich tried to use their powers to help An’desha deal with and learn to control his own mind and powers.  But An’desha was continually plagued with a feeling of unnamed dread, like something terrible was about to happen, something worse than even war with the Empire.
Just when things seemed like they couldn’t get any worse, an attack came on all of them alike: Valdemar, the Empire, Karse, Hardorn, and all the surrounding countries.  No one knew who or what had caused it.  All anyone knew was that it wiped out everything magic in its wake.  They were going to have to find a way to stop this thing before it destroyed the whole world.  And the secret to defeating it lay in the most inaccessible of places- in the evil memories held in the mind of An’desha, a man whose spirit was far too fragile, to delve into them.


Storm Warning is the first in the Mage Storms Trilogy, followed by Storm Rising and Storm Breaking.  This book is one of Mercedes Lackey’s finest.  Her characters are so well written they seem like real people, like my friends.  And when her characters go through hard times, they make me cry.  They make me unable to put the book down.  They also make me laugh, or think, or worry, or get mad, or shake my head indulgently.  But to me, a character that is written so well that he/she makes me cry, that is when the character is no longer fictional, but comes alive, and makes the reader really care.  Mercedes Lackey has accomplished that in this book.  I highly recommend this book to any adult who loves fantasy and good vs. evil stories.   I will see you all next time–right now I have to go put Storm Warning on my “Favorites” shelf!
Posted by BPL Ref at 7:15 AM