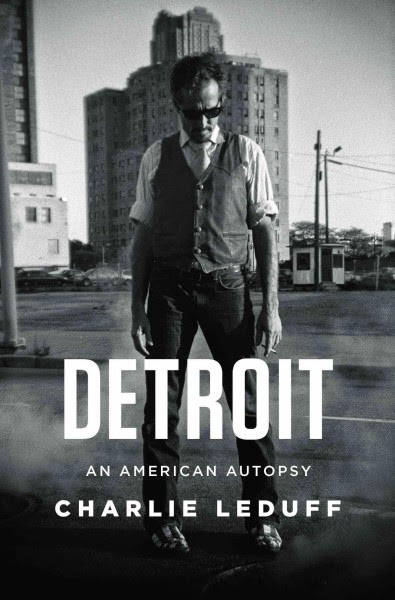 Huge swaths of Detroit neighborhoods are being reclaimed by nature.  Trees, prairie grasses and wild animals are becoming prominent in areas that were once covered with houses, sidewalks and factories.  I recently viewed a news story on the amount of change Detroit has seen in the last few years.  Using images from the Google Street View Trekker, a set of cameras mounted on top of a vehicle, Detroit’s decline is being documented and brought to the American eye.  (To read any of several news stories portraying this change, do an internet search using the keywords “Google street view Detroit”.)  After seeing these images, I just happened to see Detroit: An American Autopsy and I knew that I had to read it.

Violent crime is rampant in Detroit.  Charlie LeDuff begins his first chapter talking about being held up at a gas station on the east side, and even says that he should have known better than to stop there.  LeDuff had left Los Angeles with his wife and baby daughter to return to the place where he had a family network:  Detroit.  He was not unaware of the dangers therein; his mother had faced violence working in her flower shop, his brother had succumbed to peer pressure and drugs, and his sister had run away from home as a young teenager.

LeDuff paints a vivid picture of the destruction by fire of a significant number of Detroit buildings.  In fact, he spent quite a bit of time with a local fire squad.  Describing the firefighters as the closest thing to cowboys in today’s urban culture, LeDuff details the half-broken equipment and damaged protective clothing that the squad has been provided in order to go out into the city and save lives.  Beyond just the outer trappings, LeDuff seems to get to know the firefighters through their struggles and feels the pain along with them when one is lost.

LeDuff is a journalist who is no stranger to criticism.  He writes on rough subjects and many of the politicians, police officers, and people on the street mentioned either have no interest in having their actions reported, or feel that they have been poorly represented.  LeDuff’s topics are rough around the edges, yet provide an intriguing peek into the gritty urban subculture.

Despite the grime and flames, despite the grim topic, despite the moments of despair, this is an oddly compelling book.  I found myself reading it avidly.  Perhaps my background played a role:  I was born in a northern town built on a manufacturing background.  Not Detroit, but close enough geographically and anthropologically that I recognize the decline and decay of towns which once thrived with automotive factory work.  I understand driving by a factory where my grandparents once worked, but now the only activity is tall grass growing through the cracks in the parking lot.  I have seen many houses, once graceful, now divided into apartments or fallen into disrepair and decay.