Verdun: The Longest Battle of the Great War by Paul Jankowski 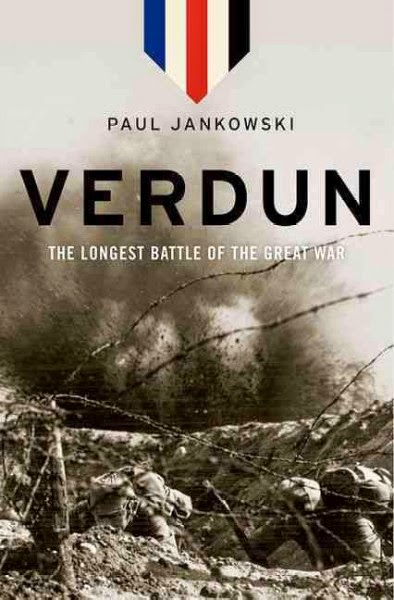 Modern wars have often been highlighted in history by some Titanic battle between the two opposing forces, an clash that often led to a decisive conclusion.  For the Napoleonic Wars it was the Battle of Waterloo, in the struggle between the Soviet Union and Nazi Germany it was Stalingrad, and in our own American Civil War, Gettysburg.  For World War I, or the Great War as it was known in Europe, that battle was Verdun.

A strong fortress on the Western front in Europe, it was attacked by a well organized German assault in February 1916.  Determined that this mighty symbol of French resistance must not fall, the French responded with equal ardor and vigor.  The Germans redoubled their efforts, as did the French, and within a short time Verdun had taken on a symbolic presence in both the Allied and German news media. And so attack followed upon attack again and again – and again.  It was not until December that the Germans gave up the effort.  Ten long months – it was the longest battle of World War I.

Thus it is no surprise that Paul Jankowski, an acclaimed member of the faculty at Brandeis University, has taken on the history of this battle during our centennial observances of the Great War.  He writes in detail and with high skill; it is an excellent account.  But it turns out that there is more to this story than just recounting the battles.  One must seek to understand why General Erich von Falkenhayn, chief of staff of the German army, ordered the attack in the first place.  It was by no means the best location from which to assault the French army. And so it has been argued over the years that von Falkenhayn had no intention of seizing Verdun; his real objective was a blood-letting of the French army, an Ausblutung he called it. But because of the symbolic nature of the battle the Germans gave about as much blood.  And the question has remained over the years; was this the real motivation of the German general staff?  The general was not known for the clarity with which he expressed himself. Supposedly von Falkenhayn sent a confidential message to Emperor William II laying out the complete objective of the battle, that document lying for years in the archives of the German army.  Unfortunately, Allied bombing of Berlin in 1945 destroyed those records, and we may never know.

Jankowski tells all of this very thoroughly and then points out that Verdun took on an even greater symbolic meaning when the French built a huge ossuary and deposited in it the bones of 135,000 German and French soldiers who died on that bloody battlefield.  The ossuary as well as the battlefield quickly became a “must see” pilgrimage for French and German families and many more, all of this high-lighting Verdun’s symbolic meaning in World War II.  It survived World War II, and while you may not be able to go there in person, you can visit it – again symbolically – by reading Jankowski’s book.  Some of you are surely already planning your travel agenda for 2016!  Since the battle lasted for the whole year, you’ve got your choice of dates.
Posted by BPL Ref at 11:11 AM