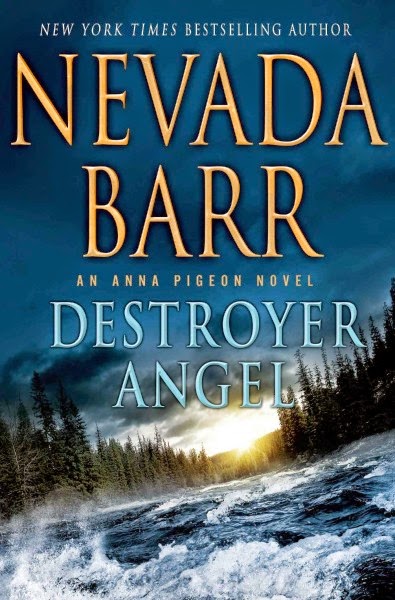 Nevada Barr jumps right into the action in her newest book,  Destroyer Angel.  Anna Pigeon is on a camping and canoeing trip in the Iron Range area of northern Minnesota with two women and their teenage daughters.  One of the women, Heath, is a paraplegic and the other, Leah, is a designer of adaptive outdoor equipment. The trip will serve as a test for some of Leah’s designs. Returning from a solo canoe trip on the Fox River one evening, Anna hears a group of men taking the other women and girls captive.  Anna stays hidden and follows the group, hoping to help the campers escape.

With such an abrupt jump into the action, I didn’t feel that I knew the camping party characters at all.  Eventually they are revealed during their adventure, but it took me a little time to understand who was who, and why they were acting in whatever manner was characteristic of each of them.  Anna is such a familiar character because Barr has written seventeen previous adventures.  (Read a review of The Rope, a prequel to the series, here.)

Heath is Elizabeth’s adoptive mother, and a paraplegic.  She was very active before her accident, and continues to be physically active and good natured about her limitations.  She and the fifteen year old Elizabeth have a very good relationship.  The other woman is Leah, a brilliant and wealthy designer of outdoor equipment.  While she easily becomes lost in her work, she is often distant from Katie, her thirteen year old daughter.

When a group of four men come into the camp and force the mothers and daughters to come with them, the scared captives must work together to keep everyone safe and alive.  Leah converts the prototype, lightweight wheelchair into a unicycle chair so that they can maneuver Heath over the rough territory.  The men, or “thugs” as they are referred to in Anna’s mind, are not cut out for back country hiking.  While the “dude” seems to be the leader, (and yes, he is actually called “dude” by his compatriots) there is definitely someone else calling the shots.  The women do all they can to take whatever advantages their outdoor knowledge affords them.  The men are not at all prepared for the rigors of walking several miles in the woods.  However, they are the ones with the knives and guns.  As Anna follows the men and their captives, she does all she can to save her companions.

The tension filled action continues; it kept me on edge and urgently reading to find out what the group’s fate would be.  Eventually most of the characters emerge from the woods bloody and battered, but alive.  (I said most, but won’t tell you which ones.)  While most Anna Pigeon books do show humans who are challenged by nature and other humans, this is definitely one of the darker volumes as Anna must look into her own soul while she attempts to stop the thugs by any means possible.
Posted by BPL Ref at 9:24 AM