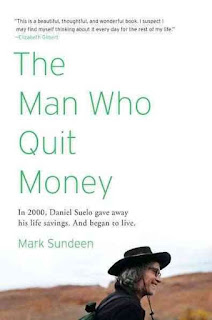 The Man Who Quit Money by Mark Sundeen captivated Jud.  It’s the true story of Daniel Suelo, the son of Evangelical Christian parents and former Peace Corps volunteer, who decided to live without money.  Since 2000, he has lived in a cave in Utah when not wandering the country. He gets around on a bicycle.  He doesn’t accept charity:  he will only take items that have been discarded. He uses the public library for computer access and has his own blog and website in which he talks about the benefits of his lifestyle, and encourages others to consume less.  He also is a very active volunteer in his community.  Suelo came to his lifestyle in a roundabout way:  he was a graduate of the University of Colorado, worked as a lab assistant and then served in Ecuador with the Peace Corps.  His mission was to help people with health care, teaching first aid and nutrition.  According to Suelo, he saw the villagers sell the fresh food they raised in order to buy processed food, TVs, and other modern conveniences that he felt made them less healthy. He continued to refine his philosophy, investigating other religions including Buddhism and the Hindu sadhu. He concludes that to be truly happy one needed to let go not only of material things but also grudges, judgments and guilt. Much of the discussion of the book revolved around whether this way of life is a true reflection of Christian beliefs and self sufficiency  or if Suelo is functioning as a parasite on society.
Suelo’s website is https://sites.google.com/site/livingwithoutmoney/ .   His blog is http://zerocurrency.blogspot.com/. 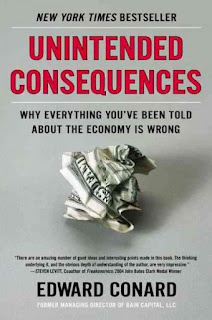 For contrast, Jud also read Unintended Consequences: Why Everything You’ve Been Told About the Economy is Wrong by Edward Conrad, a former partner at Bain Capital.  According to Conrad, the problem is more due to overspending consumers, tax policies, and deregulation which led to reckless risk by the wealthy and financial institutions.  He believes that entrepreneurs will save America because of their vision and spirit.  An excerpt of the book can be found at Conrad’s website, www.edwardconrad.com. 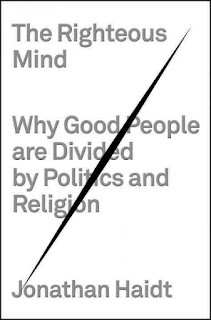 Sort of tying the two together is The Righteous Mind:  Why Good People Are Divided by Religion and Politics by Jonathan Haidt.  He believes that there is a “moral intuition” which causes people to believe intensely that they are right and others are wrong.  While many believe that they make judgments based on reasoning and facts, the truth is that they are influenced more by culture and loyalty to our group than abstract ideas.  Haidt’s examination is both anthropological and psychological, and calls for civility in our disagreements.  Booklist called The Righteous Mind a “much-needed voice of moral sanity.”
Posted by BPL Ref at 3:21 PM