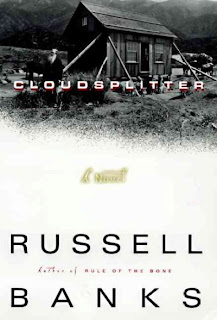 The Nevermore Book Club had a lively discussion of Cloudsplitter by Russell Banks.  The novel is told from the point of view of Owen Brown, son of John Brown who led the 1859 raid on Harper’s Ferry.  It’s a masterful recreation of a pivotal point in American history, drawing a vivid picture of the political and emotional turmoil in the years immediately preceding the Civil War.  The themes are just as timely now as then:  when does idealism turn to action then to violent confrontation?  Is violence in pursuit of a greater good justifiable?  On an individual level, Cloudsplitter details the evolution of one man’s beliefs and the effect it has on his family and a nation.
Also recommended was another of Banks’ novels, The Sweet Hereafter.  When a school bus accident claims the lives of several children, a community is changed forever.  In this novel, Banks uses a variety of points of view to draw the reader into the story:  Delores, the school bus driver who survives; Billy, who witnesses the accident and the deaths of his two children; Nicole, a cheerleader left paralyzed by the accident; and a lawyer who helps—or manipulates—the bereaved.
Posted by BPL Ref at 2:14 PM