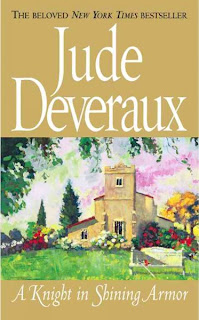 A Knight In Shining Armor by Jude Deveraux
Reviewed by Susan
A Knight In Shining Armor is one of the most romantic stories I have ever read.  It was the first of Jude Deveraux’s books to come out in hardcover and even she says it is her favorite.  It is here that she establishes a pattern that she continued to use in most of her romances.
It is a historical romance set in the present and in Tudor England.  The characters fall in love not once but three times: in the present, the past, and in their future.  It is wonderful how she does it.
In the present, Dougless Montgomery is abandoned by her abusive fiancée and his daughter in the middle of nowhere England.  Totally alone and without her cell phone, she goes into a small church and prays. When she weeps upon the grave of a knight, he is pulled from the past into the future—our present.  They don’t believe each other’s story at first.  There is a lot of humor as the knight, Nicholas Stafford, is introduced to modern times.  Eventually Dougless realizes that she really is a strong woman and she and Nicholas fall in love.  When they finally have an intimate relationship, he is pulled back into the past.  No one in the present except Dougless remembers him.  She begins to research history to find out what happened to him. She discovers that he died the date he disappeared, and that he was executed by royal command. He was innocent of the crime of which he was accused but his innocence wasn’t discovered for years.
Once again she goes to the church, weeping and praying.  This time she is the one who changes times as she is pulled back into the past with Nicholas.  The problem is that he doesn’t remember her.  In order to save him, she has to warn him of the plot against him but he doesn’t believe her.  Once again they fall in love just in time to be torn apart again, as Dougless is returned to her time.
There are more twists and turns in store in this wonderful novel.  I highly recommend that you read this book.  Believe me, you will enjoy it.  You need to read the about the power of chocolate brownies, too!
Posted by BPL Ref at 10:54 AM