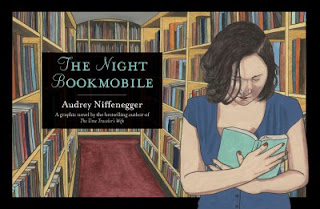 There was quite a buzz when it was revealed that Audrey Niffenegger, author of the critically acclaimed The Time Traveler’s Wife, had written and illustrated a graphic novel.  Would it work?  Was it just a gimmick? As with practically any book, the answer to that depends on the reader.  Some have loved it, some have hated it; there are few who are indifferent.  The main point made in many reviews is that this is not a book for children, since many people still equate illustrated story with comics for kids and not another form of literature suitable for adults. This isn’t a children’s book anymore than Cancer Vixen by Mary Acocella Marchetto (a graphic novel detailing a woman’s bout with breast cancer) or the classic Maus by Art Spiegelman, which tells the story of the Holocaust.


As the story opens, Alexandra is walking alone in the wee hours of the morning, having had a fight with her boyfriend.  She sees an old Winnebago and hears music, so she stops to see what is going on.  It’s the Night Bookmobile, the driver tells her, and invites her in.  She browses awhile, then discovers her old diary on the shelves.  She realizes that she has read all the books on the bookmobile.  Of course, she is told, it is her collection.  From this seemingly chance encounter, an obsession is born:  she must unlock the secrets of the bookmobile.

Here are two viewpoints about the book. First up is Gena:

Even by graphic novel standards, this is a strange piece of work.

I read a lot of graphic novels, though I confess they are usually more of the cape and spandex super hero variety. I respect the literary ambitions of the medium, but I am always a little suspicious when someone from the prose world tries to capitalize on its recent success. Thus, when I first heard that Audrey Niffenegger of The Time Traveler's Wife fame was trying her hand at a graphic novel, I wasn't sure what to expect.

The end result is a disturbing story about the nature of reading and libraries in our lives.

The story is simple enough. The lead character stumbles across a bookmobile on a late night walk. In its collection it has every book she's ever read in her life right down to her own childhood diary. She's drawn to the place and wants to stay, but that is not permitted for reasons that can't be explained. Our heroine obsesses over the
bookmobile and searches for it for years to the detriment of her life and relationships. Eventually she becomes a librarian, and every decade or so, she finds it again. The result is always the same: she cannot stay. Finally, she decides to take drastic measures to change the state of things with unsettling results.

The art is lovely, and while the story is poignant, it is disturbing on a level that makes me question whether or not I want to read as much as I do or ever set foot in a library again!

Jeanne has an alternate view:

Hmm. . . I will say that I found the story memorable and given that I have the memory of a gerbil, that’s saying something.   It did make me a bit uneasy, but it didn't turn me against books or libraries!  I was more reminded of the lines from the Merle Travis classic, "Dark as a Dungeon":

"Like a fiend with his dope, or a drunkard his wine, a man will have lust for the lure of the mines."

Most of us have obsessions with one thing or another: collecting things, a sport, watching television or whatever.  We spend too much time on that and not as much on the everyday business of living and interacting. We get absorbed and neglect other things, possibly more important things.  I say “possibly” because we can only judge what really IS important for ourselves; Sequoia’s wife, according to legend, burned his first version of the Cherokee writing system because she felt he was wasting too much time on it instead of taking care of his family.  I was intrigued by the whole premise:  just think of it, your own private sanctuary where all you’ve read is stored.

Yet that is also the one aspect that gives me pause as a reader (and I mean as a reader in general, not as a reader of this book):  there are no new books there, nothing that hasn’t already been read. If Alexandra didn’t finish a book, the pages are blank after the point where she stopped.  It’s comfortable and sometimes comforting to reread some books, but wouldn’t you want to read something else once in awhile? Is the Night Bookmobile something that is basically narcissistic, a way of glorifying self?  Is it true that we are what we read?  Or is there something more?

I don’t have the answers to those questions, but I like that the questions are asked.  While I found the ending a bit shocking, I wasn’t repulsed.  I thought in some ways it was more reflective of the old adage, “Be careful what you wish for.” Yet, is the ending bad?  I don’t know. I found the story both sad and oddly hopeful, a passing of the torch as it were.

I’m a bit ambivalent about the art.  I grew up reading comics and am still a fan, though these days I’m more a reader of comic strips than comic books.  I can’t start my day without a cup of coffee while reading 9 Chickweed Lane, Rose is Rose, and several other strips. I have not gotten into magna; I’ve read a few but some of the stylistic conventions are off-putting for me. In The Night Bookmobile, the art varies: in places it’s very flat, rather amateurish looking, while in others it’s beautiful and evocative.  It works to express certain themes in the story, I think, but if I had just picked the book up and glanced through it I don’t know that I would call it beautiful.  The cover I do like a lot, with those wonderful shelves of books and the red carpet looks so inviting: sort of velvety.  It makes me want to sit right down on it and start looking at the books.
Posted by BPL Ref at 12:31 PM