She Walks in Beauty: A Woman's Journey Through Poems; and Good Poems 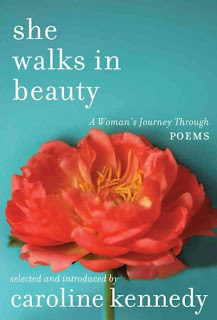 Reviewed by Jeanne
Jacqueline Kennedy Onassis spent the last several years of her life working as a book editor, bringing to print such books as The Wedding by Dorothy West and Dancing on My Grave by Gelsey Kirkland.  John F. Kennedy won a Pulitzer for Profiles in Courage.  Daughter Caroline Kennedy has followed in her parents’ literary footsteps by writing and editing a number of books.  Her most recent is She Walks in Beauty:  A Woman’s Journey Through Poems.  The title comes, of course, from the famous poem by Lord Byron:

She walks in beauty, like the night
Of cloudless climes and starry skies;
And all that's best of dark and bright
Meet in her aspect and her eyes;
Thus mellowed to that tender light
Which heaven to gaudy day denies.
Most people remember the first four lines, or else the first verse; but I'm ashamed to admit I'd forgotten the rest.  It was a bit like revisiting a place you thought you knew well and suddenly realizing how lovely it is. There are a lot of "old chestnuts" that we take for granted, in part because they were required in school, and don't take the time to reread as an adult to see why these poems (or novels or stories or whatever) have stood the test of time.
I'll apologize in advance because I'm about to climb on a soapbox here.  Sometimes literature, like fashion, goes through fads.  Certain poetic styles go out of fashion, superseded by new techniques; or certain poets become passe. For example, Rudyard Kipling was lionized in his lifetime, only to be thoroughly disparaged after his death.  Now people are re-evaluating his contribution and deciding that perhaps he wasn't too bad after all.  Other writers were dismissed during their lifetimes, but somehow their work has lasted through the years.  For me, that's the key:  no matter if some feel the phrases are hackneyed or too sentimental or the rhyme scheme is off or the work is too commercial, these are the works that meant something to a lot of people, that evoked emotion from the readers.  Poetry IS emotion.


This isn’t to dismiss the craftsmanship and artistry behind more “literary” poems.  Those impart a different sort of pleasure, an intellectual delight. I’m just saying there is a place for both and both can be appreciated.  I feel that too much analysis can sometimes drain the joy right out of poetry, making people believe that it's dull and boring.  Far from it!  Poetry has been the medium of handing down history, of rousing men for battle, of lulling children to sleep, evoking laughter and tears.
Hopping off the soapbox and getting back to the review now!

The book is divided up thematically (Falling In Love, Breaking Up, Marriage, Growing Up and Growing Old, etc.)  Kennedy introduces each section with a brief essay, sometimes explaining why certain poems were chosen and explaining the intent of each section.
The poems are a good mix of old standards by authors such as Christiana Rossetti, Edna St. Vincent Millay, John Donne, and Anne Sexton along lesser known poets and poems.   All are accessible.  You’ll meet a lot of old friends and make some new ones with this collection—I know I did. 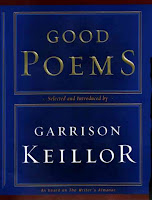 I also  wanted to put in a plug for Good Poems, selected and introduced by Garrison Keillor.  I enjoyed listening to his "Writer's Almanac" when it ran on WETS and was familiar with some of his other poetry collections.  Like Caroline Kennedy's book, this volume is divided up thematically.  I do like that in a poetry collection which I'm reading for pleasure.  Many such today are divided up by poet or by region.  As with Kennedy, Keillor mixes selections from old standbys with those from newer poets.  It's a wonderful browser's book, and Keillor has a good eye and ear for selecting poems.

Last but not least, American Folk Poetry:  An Anthology is a wonderful collection of poems, songs, ballads, hymns and other forms of popular verse.  It's one of those oldie but goodie books.  You'll find old favorites as well as some which were known only in certain regions.  Some are "true events" ballads such as "Legend of Jesse James," while others express universal emotions or beliefs.  Most are by that most prolific of authors, Anonymous.  It's a book I go back to again and again.
Posted by BPL Ref at 2:16 PM