A Red Herring Without Mustard 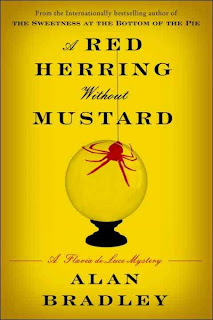 If you’ve already encountered the precocious Flavia de Luce, eleven year old chemist and sleuth, then it’s quite possible that just knowing there’s a new adventure has sent you to the shelves in search of this book. If you haven’t encountered Flavia before, then you’re in for a treat indeed.

As the book opens, Flavia is attending the village fete and having her fortune told by an old gypsy. When some of the predictions hit very close to home, Flavia panics and bolts the tent. Unfortunately, in so doing she turns over a candle and sets the whole tent aflame. Flavia does the only thing she can do in such a circumstance: she pretends she had nothing to do with the whole incident.

Anyone who had two sisters as positively beastly as Feely and Daffy would be tempted to do the same thing. They would never let Flavia hear the end of it if they have any idea she’s responsible. Besides, they would tell Father who might forbid Flavia from going to her beloved lab and conducting experiments. Better not to risk it.

Still, Flavia does feel rather badly about the whole episode, especially since the poor old gypsy doesn’t seem to have very much in the way of worldly goods. She offers the gypsy a place to park her wagon in near the family home as a way of apology. This good deed doesn’t go unpunished: when Flavia goes to visit her, she finds the old woman has been bludgeoned nearly to death.

Needless to say, Flavia is on the case at once and soon finds herself embroiled in a morass of motives from a stolen baby to copied antiques.

I’ve found all of Flavia’s adventures to be utterly delightful. The writing is sharp and peppered with entertaining references, the characters are enjoyable and the mystery is a true puzzle. Don’t be put off by the idea of a child sleuth: Flavia is an unforgettable heroine. If you like to read in order, I’ll list all the titles below but you don’t need to have read the others to enjoy this one.

1. The Sweetness at the Bottom of the Pie
2. The Weed That Strings the Hangman’s Bag
3. A Red Herring Without Mustard

If you’re already a Flavia fan, you’ll enjoy this adventure. The good news is that the fourth Flavia book is scheduled for November 2011. The title is I Am Half Sick of Shadows. At one point, Bradley indicated there would be only five Flavia books. Here’s hoping he’ll reconsider!
Posted by BPL Ref at 11:54 AM