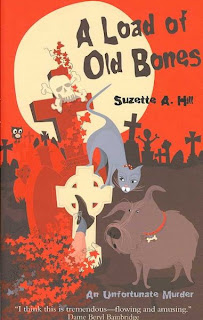 In A Load of Old Bones by Suzette Hill we were introduced to the Rev. Francis Oughterard, a somewhat nervous vicar who wants nothing more than to live a peaceful life punctuated with good brandy, chocolates and a piano on which to bang out some tunes. This idyllic state of affairs is interrupted when Francis somewhat accidentally murders a particularly annoying parishioner and must try to conceal his involvement.  He's aided, unbeknownst to him, by the two pets he more or less inherited:  Bouncer the ever eager mutt who, as his name suggests, bounds about life with enthusiasm; and Maurice, the cat who fancies himself a sophisticate. Both see that they have a vested interest in keeping the vicar out of jail, else their food supply might be cut off or at least made less agreeable.

The series continued with Bones in the Belfry, in which Francis had to hide a bunch of stolen paintings or else his alibi might evaporate-- or at least be sent to prison.

I've just finished Bone Idle,  in which Francis is once again under suspicion, asked to commit a burglary, and is a party to fraud-- in other words, things are as usual in Molehill.  If you like madcap, silly humor and are willing to suspend disbelief, this might be a good choice.  I enjoyed it, though I think this one was a bit too over the top even for me in places.  My favorite remains Bones in the Belfry, but I'll be looking forward to the next in the series. There are at least two, Bones in High Places and the newly published Bedlam of Bones which some reviewers have described as the last of the series.
Posted by BPL Ref at 8:47 AM