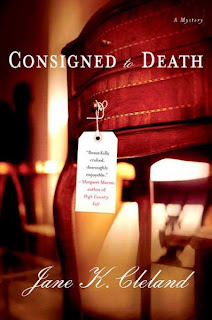 Josie Prescott used to work for a prestigious New York auction house before she turned whistleblower and testified against them in a price fixing case.  Now she’s moved to New Hampshire to start over with an antique shop of her own.  Things are going well:  in fact, she may be getting an important collection for sale. Elderly client Nathaniel Grant wants to sell his possessions and he’s approached Josie to do an appraisal.  She just needs to meet with him again to finalize the deal but when she goes to the house, no one answers and Josie returns to her store disappointed and a bit puzzled.  Could he have forgotten their appointment?


The police detective who comes to her shop doesn’t think so. In fact, he seems to think the meeting did take place.  That would certainly explain how Mr. Grant came to have a knife sticking out of his chest—a knife which has Josie’s fingerprints on it.


Full disclosure:  I won a copy of this book.


I hadn’t read any of Jane K. Cleland’s books, but thought the setting sounded interesting.  I’d enjoyed the Lovejoy TV series (ah, Ian McShane, you rogue, you!) and to a lesser extent the books. I just found the print Lovejoy a bit less endearing – annoying, even—though I liked the books’ information about antiques.  I hoped this would be similar.


I did indeed enjoy this book.  I was rather surprised to find that this was a first book by this author.  I find most first novels have a certain amount of “fact dumping,” in which the narrator tells us things we need to know instead of working the information in organically. Cleland has a deft hand there, especially in the way she introduced background characters.  The working of the antiques consignment business was well done.  There was less about the history of individual antiques than I expected, but the description of the way the auction business works was interesting and enlightening.  (I actually think that the subtitle "A Josie Prescott Antiques Mystery" is a bit misleading; it really should be "Auction House Mystery," but I suspect the publisher thought antiques would sell better than auction.)

I especially liked the little side-steps around cozy convention:  Josie has a thriving business with employees instead of moping around an empty fridge, the police aren’t idiots, Josie calls a lawyer before being questioned; and while Josie does find the detective attractive but she doesn’t start flirting.  These are small things, but ones that made an impression on me.   This probably says more about the current mystery conventions than anything else.  Some things I didn’t even realize I expected until Cleland gave it a bit of a twist.


The characters were likeable and felt well developed.   Josie was competent and sensible, the detective was professional, and –hold on to your hats!—so was Josie’s lawyer. The mystery was well done, though I found the fingerprint explanation a bit too thorough.  It was one of few times I felt that the author had to work to explain something.


Some of the reviews at Amazon complained that Josie mentioned her late father too frequently.  I noticed that, but I found it reasonable that she would think of some of her father’s precepts because she learned about running a business from him.  Had she moaned and moped over his loss, I probably would have felt differently.


I enjoyed Consigned to Death. It’s refreshing and a cut above the usual first novel.  I’ll be reading more in the series.
Posted by BPL Ref at 12:24 PM