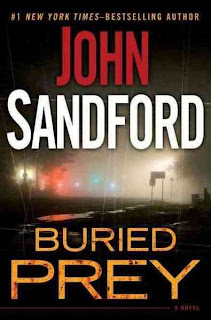 This is book 21 in John Sandford’s Lucas Davenport/ Prey series.  If you have been a fan of Sandford’s as I have been from the beginning, you have been through all of the ups and downs in Lucas’ personal life and the countless cases he has solved. This outing into Davenport’s Minneapolis/St. Paul setting is excellent. Divided into parts—Then and Now—the pace is fast, the characters are often familiar but with a few new twists, and the story is intriguing to downright gripping in the last chapters. Simply put, Sandford is at his best.


NOW—a condemned house is being razed when the bulldozer turns up a horrific find.  The bodies of two young girls, wrapped in plastic, obviously buried for a long time, bring Minneapolis homicide Chief Marcy Sherrill and her homicide team to the site. Sherrill’s old buddy (and former lover) Lucas Davenport turns up at the scene too because he knows these victims.
THEN--In the summer of 1985 it is a hot afternoon and two little girls named Jones don’t come home from playing in their neighborhood.  Working against time the Chief of Detectives pulls a very young Lucas Davenport out of his patrol car and makes him a detective for a day or two so more police are working the case.  Lucas is excited to work the case because he wants to move to detective permanently and this is a high profile opportunity to show he can. Lucas gets word that a guy named John Fell thinks he might know the person who took the children. Davenport works the streets to find John Fell, but the man has vanished.  Piecing together clues as he can, Lucas finds Terry Scrape, the street person Fell told others might have the girls. Lucas’ gut tells him Scrape is innocent and Fell knows more about what happened. Sure that Fell is the murderer Lucas asks for more time to find him, but the police are in a hurry to solve the case as the media pressure mounts and it is obvious the girls are gone for good.  Lucas pushes aside his feelings that things are really wrong, and he helps hunt down Scrape. When everything does go wrong the police department declares the case closed.

Lucas is credited with breaking the case and is moved to the detective division, but he knows mistakes were made and Fell is out there somewhere probably taking and murdering other children.
NOW—Haunted for years that other children have died because Fell escaped him, Davenport offers to use his resources from the Minnesota Bureau of Criminal Apprehension to help Marcy solve the old case. He wants John Fell.  Bit by bit Lucas pieces together who John Fell really is then a totally unexpected tragedy that rips at his heart turns solving the case into an obsession.  This is when the pace picks up and the action really takes off. Lucas ends up odds with his wife, his friends, his partners, and himself over the case, but he cannot stop himself. Eventually he will have to make a choice that could be fatal.
John Sandford has always done a great job with his characters and plotting. Buried Prey brings new dimensions to the series. It also continues Sandford’s tradition of plot twists that surprise you and move the story in a direction the reader might not expect. Overall, this has been my favorite book of the new summer crop.
Posted by BPL Ref at 6:18 PM