For the uninitiated, the Nevermore Book Club meets every Tuesday at 11 a.m. at Main. Participants share what they’re reading, often leading to some lively discussions. It’s very informal and a lot of fun. The library supplies coffee; doughnuts come from The Blackbird Bakery! Director Jud Barry leads the group. Everyone is welcome to show up with a book and join in!

Here are some of the books discussed: 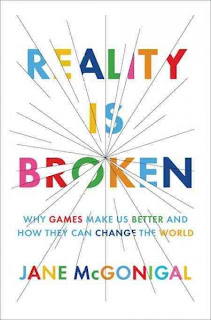 Reality is Broken: Why Games Make Us Better and How They Can Change the World is the somewhat audacious claim of Jane McGonigal (306.487 MCG Main). Director Jud Barry read an excerpt in which the author and her husband race to clean the bathroom because they’re playing an online game in which you earn points by doing real life chores. Book club members immediately saw the possibilities and are anxious to try it out in their own households.

Andrew Johnson by Annette Gordon-Reed (973.81 GOR Main) This brief biography of Johnson is a part of the “American Presidents” series and was written by the author of The Hemingses of Monticello and Thomas Jefferson and Sally Hemings. Our reader felt that Gordon-Reed’s view of Johnson was somewhat narrow and not very sympathetic and didn’t really deal with his amazing rise from illiterate tailor to President.

Swan Song by Robert McCammon has another reader riveted! It is a post-apocalyptic novel that follows the lives of a handful of survivors, including a girl called Swan. A devilish figure called The Man with the Scarlet Eye is seeking to destroy her, but a ragtag group is determined to keep her safe. The book is often compared to Stephen King’s The Stand and has won praise for the excellent characterization as well as its plot.  It was a co-winner of the Bram Stoker Award and was a World Fantasy Award Best Novel nominee, and many have commented on the compelling characterization.

Sacrifice by S.J. Bolton (SSB F BOL Main) is a thriller set in the Shetland Islands. When a body is uncovered in a bog, the local police think it’s a prehistoric burial but Dr. Tora Hamilton immediately disagrees—ancient women didn’t wear nail polish. This was the first thriller by Bolton, who now has four novels to her credit and is viewed as an up and coming thriller writer. She creates intriguing, flawed characters and develops her settings so well that it’s almost like visiting the place. Folklore often figures into her work. These aren’t cozies, and there are some rather gritty scenes.

Edie Ernst, USO Singer—Allied Spy? By Brooke McEldowney (741.5 MCE Main) chronicles the World War II adventures of a young singer who falls in love with an American soldier and a German officer. The story is told in comic strip format, but the black and white art is as expressive as a vintage movie. It got raves from one reader and convinced another to check it out! 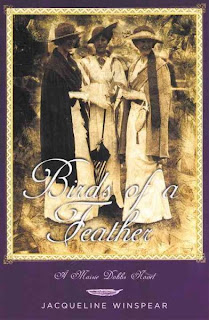 Jacqueline Winspear’s Maisie Dobbs series has captured the attention of another reader! These books are set after World War I when former nurse Maisie uses knowledge of psychology to become a private investigator. The setting is well done, and Winspear has a real feel for the time period. Maisie has had an eventful life, including the loss of a love in the War. The books are a good mix of history, mystery, and a bit of romance. Our reader has completed the first two books, Maisie Dobbs and Birds of a Feather, and is looking forward to the next book in the series.

Bring a book and join us next Tuesday!
Posted by BPL Ref at 11:36 AM