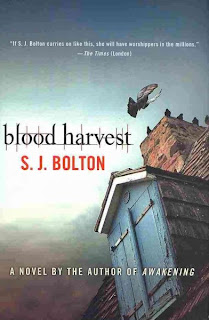 Heptonclough is a picture-book English village, complete with an old church, moors, and families who have lived in the same place for centuries. The Fletchers, however are new: mum Alice, dad Gareth, the two boys, Tom and Joe, and baby Millie, a blonde toddler. They’ve just built a house there and are learning the village ways. Also new is the vicar, Harry, a young man eager to take his place as leader of his flock. But underneath, there is something not quite so welcoming: there are whispers, voices, like spirits trying to lead people astray, glimpses of someone—something?—that might be there or might be imagination.

The dead children aren’t imaginary, though.

Blood Harvest, the recent thriller from British author S.J. Bolton, opens with the discovery of three bodies in a grave where only one should be. All three are very young girls, blonde, and with similar injuries. The next part of the book picks up earlier, introducing the characters and giving the reader background on the town and its inhabitants, then draws the action inexorably toward the discovery.
I’ve read all three of Bolton’s novels and I’ve come to expect a certain number of things. One, that there will be interesting, believable and well-developed characters in a very distinct setting; two, that folklore will be a factor in some way; three, that there will be enough layers and intriguing themes that I will want to discuss the book with someone else immediately; and four, that the story will be a wild roller coaster ride through a tunnel of horror and when it’s all over I’ll be dazed, breathless and ready to read the whole thing over again to figure out how I could have gotten it all so wrong. Blood Harvest meets or exceeds all of the above.

The characters are especially rich in this one: the story is told from several points of view, all well done. Harry, the vicar, is an engaging, open-hearted young man who is drawn to Evi, the therapist who is treating a young woman who lost a child. Evi has a physical handicap—also a hallmark of Bolton’s writing—but has never let it stop her. She’s a tough, no-nonsense sort of woman. She’s attracted to Harry, but is not one to let her personal life take precedence over her professional obligations. Tom, the eldest Fletcher child, is just old enough to feel responsible for his siblings but young enough that we can’t quite be sure that he’s giving us an accurate picture of what he sees. The children view the world in very different terms than do their parents: a world of bullies, creatures, possible ghosts and definitely things that go bump in the night. Yet another view is offered by Gillian, one of Evi’s patients, a bereaved mother who insists her child did not die in the fire. She roams the moors around Heptonclough at night, searching for her daughter—her young, blonde daughter.

There are a number of themes running through this book. Motherhood and all its ramifications are personified in various female characters, rather like the triple aspected goddess. Ancient ties to land and to the sacred are contrasted with modern medicine and medical ethics. Above all, there is obligation: to the land, to family and to one’s calling.

Given Bolton’s fondness for folklore, I was half-expecting something along the lines of Tom Tyron’s Harvest Home or perhaps Shirley Jackson’s “The Lottery.” Folklore does play a role but more indirectly than I had anticipated. As I said, Bolton never fails to surprise.

The setting is an English village in a rural area. Bolton’s writing is always very atmospheric and tactile. You almost feel the cold of the stones, the damp of the fog and chill air, and see those towers pointing to the sky. To steal lines from Emily Dickenson (and if one is going to steal, by all means steal from the best), “I never saw a moor—“ but Bolton’s writing is the next best thing to being there. The landscape is almost a character in its own right, and always influences Bolton’s characters: in many ways, the land and the people are one, which is why her stories are usually told from an outsider’s point of view.

I can’t say I’m completely happy with the ending. It was true to the book and it was more than plausible given what had happened. I’ll even reluctantly admit it sort of felt right, given the emotional state of the characters at the time. It just wasn’t the ending for which I hoped. I almost said that I wanted her to tell us more about the aftermath, but then I remembered the old saying about being careful what you wish for. I think I’ll settle for the open-ended ending.
Posted by BPL Ref at 10:24 AM