People of the Longhouse by W. Michael & Kathleen O’Neal Gear 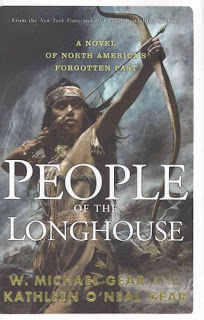 
I found a pristine Indian arrowhead in my backyard while setting out my garden. How long had it been there? Who lost it?

There is little good fiction written about America’s pre-history. This husband & wife team transports you to a place and time that many of us never knew existed. It’s the world where we now live, seen through the eyes of the people who lived there before us.

The Gears are excellent writers. He was nominated for the Pulitzer Prize. She is a former state historian for Kansas, Nebraska and Wyoming for the Department. of the Interior. They are both trained archaeologists.

The People of the Longhouse (F GEA Main) focuses on the Iroquois of the early 15th century. After a raid, young Odion and his little sister, Tutelo are marched away as spoils of war. Their parents set out to rescue them. War chief Koracoo and husband Gonda set an uneasy truce with a neighboring tribe and lead a small rescue party. But this is not an ordinary war party they are chasing. They are following an old witch-woman named Gannajero, a legendary evil trader with sinister plans for captured children.

Koracoo and Gonda are devoted parents and leaders of their tribes, racked with guilt about their obligations and failures. The children are multi-dimensional characters. Clever yet vulnerable. Gannajero is a complicated character. Not all is as it seems with her, she is part victim and part evil. The plot flows smoothly, rippled with glimpses into future and past events.

The Gears have the trademark of selecting a time and place in pre-Columbian America and creating a series around the people of that area. Their love of the Native American culture glows through their work and their archaeological expertise gives it authenticity.

This first book of the “Forgotten Past” series is set during a turning point of the Iroquois nation. Their time and culture was turbulent. A nation fragmented into various tribes with challenges that will change their world forever. And ours too. They created the democracy that our founding fathers acknowledge as the basis for our own.

What a wonderful background for a fascinating story.
Posted by BPL Ref at 2:07 PM