In the Still of the Night: Rule Rules! 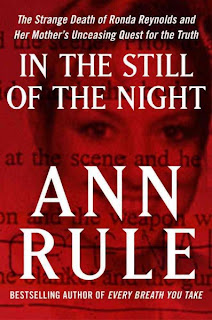 When Ann Rule speaks, people listen. She’s a dynamic true crime writer. She often takes on subjects that make you cringe, like Ted Bundy. She thoroughly researches the material.

Barb Thompson is a strong independent woman. Nine days before Christmas in 1998, Ronda, her only daughter, had arranged to visit her mother in Seattle. Ronda never made that visit. Instead, she died that morning with a gunshot wound to the head.

Ronda Reynolds had been a Washington State Trooper. She had divorced another trooper and made enemies with the public and within the department. She had then remarried a respected high school principal, but the marriage was in trouble. The coroner declared it a suicide. So did the local police and her estranged husband. But . . .

There were several inconsistencies and poor detective work in the case. The husband claimed to have slept through the shooting, only 15 feet away. Her stepchildren were removed from the scene before being questioned, including a teenage stepson who hated Ronda. His friends reported that the stepson was heavily into drugs, and had been peeping at Rhonda while she showered. Ronda’s husband's ex-wife may have been involved too.

This story is a tragedy. It is also a story of a loving and devoted mother who wanted justice for her daughter. Frustrated and angry with an investigation so obviously botched and incompetent, Barb Thompson never accepted the ruling of suicide. The coroner who ruled it a suicide on the day of the death became the center of the later civil suit.

The case became well known in the region. It began and finished the careers of elected officials. It was a locally famous case that was in Ann Rule's backyard. It is obvious that Ann Rule admires Barb Thompson. In fact, this is the only book by Ann Rule that I've read in which she allows her feelings to leak through. This may turn off some readers, but this still evolving story deserves to be told. I don't think anyone else could have done it better.

The case was declared a murder in November, 2009. The case is still unresolved, but Ann Rule sheds light on the mystery surrounding it. Some people will have egg on their face. Others should be expecting a knock on the door from the FBI with a search warrant.
Posted by BPL Ref at 9:18 AM