Bones in the Belfry: A Batty British Book

Bones in the Belfry by Suzette Hill (F HIL Main)


(Please forgive the heading. I couldn't resist the alliteration.) 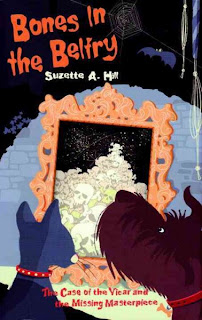 Do you watch the Britcoms on PBS? You know, the shows like “Keeping Up Appearances” or “Are You Being Served,” in which people end up in increasingly ridiculous situations all while trying to keep their dignity intact. If you like that sort, then do I have the book for you!

It’s the late 1950s and the Reverend Francis Oughterard is very happy in his work as vicar of a small village. He does a lovely funeral, for instance, and doesn’t mind the sermons or weddings. Baptisms are a bit of bother, mainly because the infants are often squirmy and occasionally go headfirst into the font, which is disconcerting and upsets some people. Other than that, and handling the tantrums of the organist and smoothing things over with some of the parishioners who squabble about who’s in charge of what, he finds he has a lovely existence, treating himself to some fine wines and enjoying the company of his dog and cat. Well, there was that business when he strangled Mrs. Elizabeth Fotherington but she really had it coming to her. Honestly, he didn’t really mean to do it and he certainly won’t do it again.

The trouble starts when his friend Nicholas brings by some paintings that he wants put in a safe place, paintings that Francis is sure are stolen. Normally, he would have refused but Nicholas provided him with an alibi, no questions asked, in that little matter of Mrs. Fotherington. While Nicholas hasn’t actually said anything, the vicar has the distinct impression that if he refused to stash the paintings Nicholas might recant.

The plot thickens when Maud Tubbly Pole turns up. She’s a crime novelist who thinks the strange unsolved murder of Mrs. Fotherinton would be a perfectly thrilling premise for her next mystery. What’s more, she thinks the vicar is just the person to help her research the story.

The story is narrated from three points of view in three distinct voices. The first is Francis himself, a fussy somewhat nervous man who just wants to sip his wines and perform his duties in peace. The second is Bouncer the dog, whose former owner was a banker who absconded with a suitcase full of cash. Bouncer is an energetic soul, obsessed with his bones—the chewing kind—and rambling around with his canine buddies. Maurice the cat is the third narrator, former pet of Mrs. Fotherington and who seconds the vicar’s vote of “good riddance.” Bouncer finds Maurice to be smug and superior, Maurice thinks Bouncer is scatterbrained and none too bright even if he has learned bits of Latin from his jaunts in the graveyard, and they both know that Francis is their bumbling meal ticket. They are well aware of the vicar’s little misadventure, and (unbeknownst to Francis) actually helped cover up the crime. After all, as Maurice points out, if Francis goes to the gaol, they’ll be out on the street again. All three are quite self-centered and determined to maintain their own status quo.

I found this to be a rollicking tale. I could almost picture some of the scenes in my head and would have sworn I heard Hyacinth Bucket’s voice: it’s that type of book. This is actually the second in the series. I’ve requested an interlibrary loan of the first book, but I didn’t have any trouble following the plot at all.

Update: I borrowed and read the first book in the series, A Load of Old Bones. It was good, but not as good as the second book. I don’t know if that was because I already knew much of what was going to happen from hints in the first book or if it was because it took awhile to introduce the characters and situation. A colleague tried to read it and gave up. I think this may be one of those cases when the author sort of hit her stride in the second book. I’ll know more after I read the third in the series, Bone Idle.
Posted by BPL Ref at 12:42 PM