Bearers of the Black Staff: Legends of Shannara 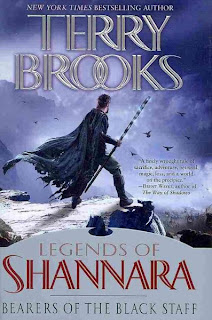 Terry Brooks has long been known for his science fiction and fantasy. He worked with George Lucas to write Star Wars: Episode I The Phantom Menace.

Like Tolkien and J.K. Rowling's Harry Potter series, he has created a whole, fully-developed world, bringing together elves, Druids, trolls and men to battle demons. The Shannara series occur years after the "Great Wars" of men, wherein which civilization is pretty much wiped out. A handful of survivors were led to a valley in the mountains. From there, the world is slowly recreated. The Shannara trilogies cover later generations of a family that reluctantly is called to fight magic that has been twisted. The stories are wonderful. This book backs up in time to the beginning of the story, when their peaceful valley is breached by demons.

For 500 years, one man is chosen by his predecessor to be the Bearer of the Black Staff. Not used in centuries, the staff is said to contain magic. Syder is the current Bearer. He discovers a rift in the magic that has both protected and hidden their peaceful valley. Worse than that, he finds that the whole protective barrier is failing. Already some monsters have entered. He saves a couple of young trackers, Pan and Prue, from a savage death. They rush to warn the valley peoples, but few believe it is happening.

These characters are fully developed. Syder's background and a lost opportunity at love are touching. How he is unwillingly selected to be the Bearer is tantalizingly hinted at and finally explained at the very end. The humans Prue and Pan, are nicely portrayed, pragmatic yet youthfully inexperienced. An elfin princess, Phyrne, is eager be part of the adventure, yet drawn to the human Pan which is a major taboo in their world. The valley settlements are fully drawn out societies: bickering leaders, a king blinded by love, intrigue and murder.
Then there is a threat from without: a Troll army wants the valley for themselves.

As a long-term follower of the Shannara books, this is a story that I've been awaiting. The background is a foundation for all the other series. It's the beginning thread that leads to the other stories. For someone new to Shannara, it is an interesting book that ends on a cliffhanger. It might just hook you into wanting more, like it did me all those many years ago.

One thing for sure, Terry Brooks has a master's touch.

Bearers of the Black Staff is available at both Main & Avoca under F BRO. Main also owns a copy of the audio book (CD F BRO).
Posted by BPL Ref at 12:03 PM