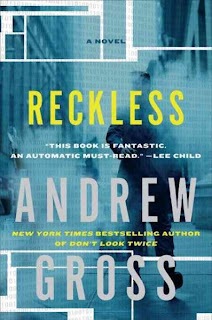 Reviewed by Susan Wolfe
“The planes are in the air,” chillingly whispered over the telephone by a mid-eastern businessman initiates a plan to bring down the U.S. economy.
Reckless is such a fitting name for this book.  Fast paced.  Straight from today’s headlines.   It reads as a stand-alone book, but it is part of a series featuring Ty Hauck, a former police investigator turned private security executive.  When a friend and her family are brutally murdered, his detective skills reawaken.   Wall Street reels.  He catches the whiff of murder behind the mysterious deaths of two investors and discovers that the boyfriend of a high powered socialite is not who he appears to be.
The trail leads through a maze of lies and terrorism.  The protagonists are well developed.  Hauck is a complex character with both gentleness and toughness.  Naomi Blum is a tenacious agent from the U.S. Treasury Department, young and anxious to prove her worthiness.  Politics and betrayal, along with financial terrorism flow smoothly in the hand s of Andrew Gross.  As a writer, he has co-written 5 books with James Patterson.  His characters are a nice cross between Patterson's Alex Cross and Clive Cussler's Dirk Pitt.  The action jumps out of the pages of this book.
Expect twists and turns.  It's a race through a Fun House.  The story starts with a bang.  A nice family brutally murdered.   The action races through Wall Street, the mid East, London and Serbia.  Conspiracy is built upon conspiracy.
It is an exhilarating thriller by a well grounded author with a frightenly believable story.
Posted by BPL Ref at 3:22 PM