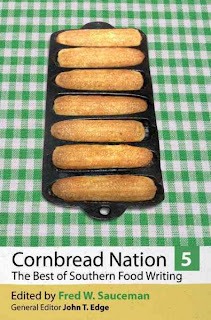 Mention country ham, sawmill gravy, soup beans or fried apple pies and Appalachian natives will snap to attention. Food is an important part of Appalachian culture, as distinctive as the region’s music, and born of the same blending process.

Fred Sauceman has spent much of his life exploring the wonders of Appalachian food and the people who create it.He’s produced two wonderful documentaries that highlight local delicacies.“Red Hot Dog Digest” (DVD 647.95755 Main) takes the viewer down Lee Highway, stopping at locations such as The Corner Dog House to talk about this regional treat. People in this area love their red hot dogs.  (I have to say I was a bit taken aback the first time I saw a hot dog that was NOT red! I thought there was something wrong with it.) Now I want to go visit the Dip Dog, too.


The second film highlights a Greeneville treasure, “Beans All the Way” (DVD 647.95768 BEA).  In 1946, Romie and Zella Mae Britt opened a little eatery serving good down-home food. The film tells their story, including the invention of their signature pinto bean dish.

We’re VERY pleased to say that Fred Sauceman will be at the Main this Sunday, November 21, at 3 pm to show “Beans All the Way.”  There will also be a food tasting!  This is a free event.  Fred will have a selection of books for sale that he has written, edited, or otherwise contributed to.  Some of his works include:

The Place Setting: Timeless Tastes of the Mountain South, from Bright Hope to Frog Level (641.5 SAU Avoca) is a wonderful collection of essays about regional foods. Most of the essays are interviews about one eatery or cook, letting him or her tell the story with minimal interference from the author. Places include The Burger Bar, Ridgewood Barbecue, and the Snappy Lunch. The essays are warm and informal, like chatting over a kitchen table. Some recipes are included as well. There are actually three volumes in the series and, like potato chips, it’s hard to stop at just reading one.


Cornbread Nation 5 (394.12 COR Main & Avoca) is a wonderful compilation of essays about Southern food, from Barbara Kingsolver’s thoughts on being a locavore to the joys of country ham as discovered by a Yankee.


The Southern Foodways Alliance Community Cookbook is brand new! In it you’ll find sections devoted to all the foods dear to a Southerner’s heart: gravy, chess pie, chicken and dumplings. It would make a fine gift for anyone, even yourself.