Meet Cleo, the Cat Who Mended A Family 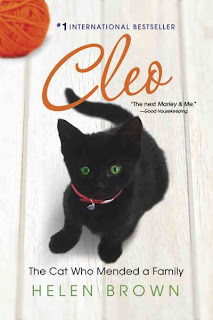 
New Zealander Helen Brown was a young wife with two growing boys, a husband and a dog. Life was good.Nine year old Sam, the elder boy, was lively, affectionate and had a tender heart for animals.He was excited about his upcoming birthday: the only present he wanted was a kitten. He’d already picked one out, a runty little half Abyssinian/ half alley cat he’d dubbed Cleo.She wasn’t ready to leave her mother yet, so the kitten would be a belated gift. Helen wasn’t quite sure about the cat. She was a dog person, she thought. However, Sam was emphatic that he wanted a kitten, so a kitten it would be.

Then the world fell in. Sam found an injured bird. In his rush to get it to a vet’s, he stepped out in front of a car. He was pronounced dead at the hospital.

A nightmare of grief and anger followed. Helen had fantasies about confronting the woman who killed her child but couldn’t face going to the trial. She wanted to cover her younger son Rob in bubble wrap to keep him safe from all the dangers of the world. The marriage, already on shaky ground, threatened to unravel.

Then one day just a few weeks after the accident, there’s a knock on the door. The kitten is ready for her new home. Through the fog of pain, Helen is amazed—how on earth could the woman believe they would still want this kitten? Then Rob sees the kitten—Sam’s kitten—and there’s no way she can say no. She promises herself it will only be for a few days. After that, she can send the kitten back, saying they’d tried and it just didn’t work out.

Thus begins a journey of recovery, of discovery and re-discovery.

The book covers twenty five years of sorrows and joys, and does so with honesty and humor.Many reviewers have said it will rip your heart out, but I would add that it will also make you smile and believe in the resilience of the human spirit. She doesn’t minimize the pain, but neither does she wallow in it. Brown is a well-known columnist and journalist in Australia and New Zealand, and she is good at her craft. She has a sharp wit, self-deprecating humor, and an eye for detail. She writes with refreshing honesty, yet refrains from bitterness over some situations.

Unlike some animal stories, Cleo is indeed at the heart of this tale as guide and healer. Her feline approach to life encourages her human family to open up to possibilities and to embrace change and love. She’s feisty, loving, and adventurous, an ugly duckling who turns into a sleek black feline goddess.>Her sense of timing is impeccable as is her judgment of character.She has a special bond with Rob, and gives the family a living link with Sam. There’s even a touch of the mystic, which I won’t spoil by divulging, but as with the rest of the book, Brown draws the lessons lightly, never hammering home a point that can be made more gently.

I found this book to be a delight. I admit some trepidation at starting it as I wasn’t in the mood for a three hanky experience. Instead, I found a very human (and feline) story of love, loss and learning to live again. At the end of the book, you feel as if you’ve known Helen Brown for years, that you’ve grown up with her children and that Cleo has played a part in your life as well. Rather than a tear-jerker, I’d count this as a warm and friendly chat with a strong, funny, inspiring lady who has a wonderful way with words.
Posted by BPL Ref at 12:15 PM